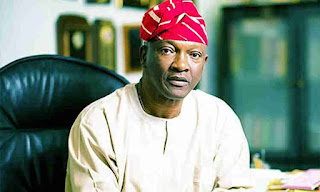 The Lagos State Signage and Advertisement Agency, LASAA, has defended the removal of the billboards and posters of the Peoples Democratic Party, PDP, governorship candidate, Jimi Agbaje

Agbaje had reported the issue to the Lagos State Commissioner of Police, Edgar Imohimi.

Speaking at a Security/Stakeholders Meeting with INEC and Political Parties summoned by the Lagos Police Command on Wednesday, the General Manager of LASAA, Mr. Mobolaji Sanusi, explained that the PDP candidate did not seek the permission of the agency unlike his counterpart in the All Progressives Congress, APC, before mounting the billboards and pasting the poster especially on the Lagos Island.

According to him, there are rules and regulations guiding the pasting of bills and posters in Lagos State which must be strictly adhered to.

He explained that the agency clean up the state on weekly basis to remove any poster or billboards mounted illegally across the State.

Meanwhile, the police boss advised that all participants and political candidates should always engage the agency before pasting and mounting billboards and take the advantage agency’s discounts.

He said, “Lagos State is politically matured. The removal of the billboards and poster could not have been an intentional act and that is why I have invited the LASAA MD to be here today in order to clear the air on the issue.”