Weep for Nigeria, not Deji Adeyanju by Femi Fani-kayode 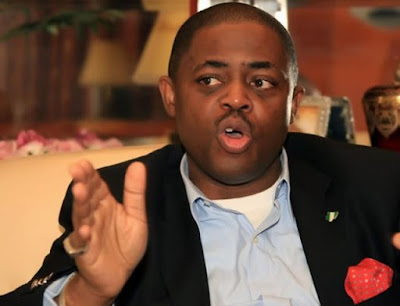 I do not agree with him on everything and I deplore his views about my friend and brother, the lion of the east, Mazi Nnamdi Kanu yet the truth is that I love and admire my younger brother Prince Deji Adeyanju.

I consider the outrageous things that the Buhari government is doing to this deeply courageous man, who has always resisted tyranny and injustice and who has always spoken up for others, as unacceptable and I am utterly astounded at the silence of the entire political class in the face of this injustice.

Where are the voices of the human rights and civil rights groups who he stood shoulder to shoulder with in his quest to make Nigeria a better and safer place? Why have they not condemned this injustice and outrage?

Not one notable politician or political party or so-called leader has spoken up publicly for Deji and this sickens me. When will they learn that what has happened to Deji may end up also happening to them or theirs if not challenged and checked?

When will they stop being self-serving, self-centred, shortsighted, lily-livered cowards and learn that we must all speak for one another and watch each others backs?

This is especially so regardless of how we may feel about the victim of the governments tyranny at any point in time? Whether you like him or not, it is Deji today but it could be any of you tomorrow.

When will they accept the fact that this battle is not merely about winning an election but about breaking the yoke of tyranny and liberating our people from wholesale bondage, modern-day servitide and good old-fashioned slavery?

When the history of this age is written, amongst the heroes that will be listed will not be the regular politicians and desperate office-seekers who regard themselves as todays leaders but rather selfless, courageous and strong-willed men and women of principle, honor and vision who were prepared to put everything on the line including their lives and liberty for a better tomorrow like Deji Adeyanju.

It is not members of today’s ruling elite and political class who are, generally-speaking, fearful, timid, weak and frail and who, more often than not, are given to compromise with evil in return for gain but rather the non-conformists and great and heroic figures like Adeyanju that are the true architects of what will eventually and inevitably be a new and free Nigeria where justice, the rule of law, self-determination, free speech, freedom of association, true democracy and liberty has its place.

Deji may be in detention today and they may be planning to rearrest him when he is released and lock him up again on terrorism charges but the truth is that it really does not matter because tomorrow belongs to men like him.

And most important of all, no matter what they do, they cannot break his indomitable spirit. I weep not for Deji Adeyanju, I weep for Nigeria.