We can’t be cowed to relax - Nigeria Customs 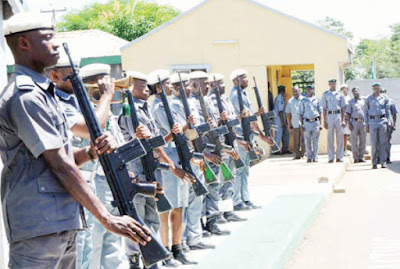 The Nigeria Customs Service (NCS) Thursday sent a chilling message to opponents to underscore its fierce implementation of any-smuggling war that no amount of blackmail would force it abdicate its duty.

There has been a social media onslaught on the activities of the service since the present Comptroller-General, Col. Hameed Ali rtd, changed the old order, intensified transparency and rule of law in the organization.

Read Also:Suspected kidnappers of customs officer nabbed
Those that benefited from the spoils in the old order are however, fighting with everything in their capacity to reverse the trend.

But the Public Relations Officer, Mr. Joseph Attah, who spoke with The Nation in his office Thursday, countered the “insinuations,” of the critics, describing them as measures to mislead the public to force the NCS to chicken out of its enforcement of the anti-smuggling law.

The spokesman, who listed the pace-setting achievements of Ali’s led Customs to include the generation of the highest ever N1.037 trillion last year and definitely surpassing that figure this year.

Seizure of 2,671 pump action raffle last year, the last week seizure of 59 containers of tramadol and other controlled drugs across the commands.

He submitted that “it becomes questionable if it is at this time that the people will choose to say otherwise. We are not surprised because we understand that the new style of doing things blocks the interest of certain people.

“This is the new Nigeria Customs Service under the CGC, Col. Hammed Ali rtd. The service that is discipline focused and determined to serve Nigerians better. I therefore urge the general public not to be distracted from supporting the service to serve the nation better.”

The Public Relations Officer said that “it clearly shows lack of understanding of the process. For the avoidance of doubt, auctioning of seized goods is the statutory function of the service in line with section 167, (2) of the Customs and Excise Management Act CAP 45 LFM 2004.”

Attah said that in view of the performance of the service under the current administration, it calls to question the intention of the critics, as Customs generates more revenue now than it has ever generated in its over 100 years of existence.

Attributing the rise in revenue generation to the commitment of the officers to put national interest above personal interest, he said “in Apapa we did not just seized 40 containers, we paraded the three suspects and the N150 million bribe money that was rejected”

He also noted that contrary to such people say, no Customs officer now needs any connection to get promoted as it is all based on merit.

This is to avoid over familiarity that could lead to compromise.

On auctioning of the customs goods, the spokesman said that since 3rd July, 2017, the Comptroller-General of Customs introduced the e-auction platform to eliminate the sharp practices that were associated with the manual process of the past. The e auction enhances maximum revenue generation and gives Nigerians equal opportunities.

According to him, the e-auction guarantees the security of the revenue.