"Pochettino will join Manchester United in 2019" 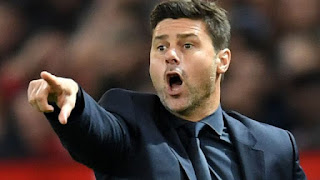 Jamie Redknapp believes the Red Devils will land what appears their preferred option to succeed Jose Mourinho at the end of the 2018-19 campaign.

Mauricio Pochettino is “the special one” and will be the man to replace Jose Mourinho at Manchester United, says Jamie Redknapp.

The current Tottenham boss is considered to be a leading contender to fill the managerial void at Old Trafford.

Various other options are said to be in the frame , but United would seemingly welcome the opportunity to bring in another coach with considerable Premier League experience.


No deal will be done any time soon, with Ole Gunnar Solskjaer having taken the reins until the end of the season , but the situation will be reassessed before the summer.

"Of course [Spurs fans should be worried] because he's the special one, he's a great manager that everyone would want at their club.

"Tottenham have got to do everything in their power to keep him, it's as simple as that. He's a very talented manager, the players adore him and play for him and you can see why Manchester United would want him."

While tipping Pochettino to take on a new challenge in Manchester, Redknapp concedes that the Argentine will find it difficult to walk away from an ambitious project in north London.

He added:"It is all there for him, moving into a new stadium, a great young side and if he was to move it would be a real shame for Tottenham.

"But I'm sure, knowing Daniel Levy, he will think 'where is the next one, who is the next manager that could take this club forward?'
"He will know there are people out there.

There are not many like Pochettino but I would say someone like Eddie Howe would be the perfect fit for Tottenham; he gives young players an opportunity.

"So I don't think it will be the end of the world but it will be a huge blow because it will give a lot of players the opportunity to say 'if he's gone we might want to go as well'.

"They have to keep him, it's as simple as that. Tottenham have let a lot of their best players go in the last 20 years but they can't let their best manager go because he's a special talent. It would show a lack of ambition if they did let him go."