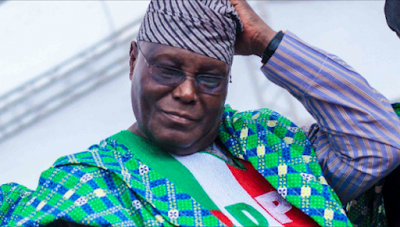 A group, the People’s Rights Assembly (PRA), has fired back at the presidential candidate of the opposition Peoples Democratic Party (PDP), Alhaji Atiku Abubakar over his claim that the best Nigeria enjoyed was under the PDP government.

PRA was reacting to the claim by Atiku in Ibadan earlier in the week at the South-West zonal presidential rally of the party that Nigeria was blossoming before the APC government came on board in 2015.

Atiku said he headed the best economy team for Nigeria between 1999 and 2003, adding that such prosperity will be returned to Nigeria in 2019.

Simon Achusa and Bolaji Akiloye, President and Secretary General of the group, respectively, in a rejoinder to Atiku’s assertion, described the Turakin Adamwa as a politician who has earned the unenviable reputation of an alarmist and propagandist, infinitely obsessed with power.

The statement claimed that the former Vice President is known throughout Nigeria and worldwide as a politician with an unstable political character and high quotient for baseless leadership discontent.

The group said, “If the PDP governments led Nigerians to prosperity and peace, what motivated Atiku’s betrayal of the same party he co-founded and its governments severally in 2007 under former President Olusegun Obasanjo (OBJ) and in 2013 under former President Goodluck Jonathan? Atiku speaks and does not listen to himself; he hardly realizes that he often contradicts in the frenzy of campaigns.

“For eight years, Atiku deputized OBJ as President. What legacies did that administration bequeath to Nigerians? None! Atiku as a leader presided over the rape and plundering of Nigeria. As chairman of the National Council on Privatization and Commercialization (NCPC), the former Vice President dubiously sold critical national assets to himself for personal enrichment and to cronies.

“Atiku criminally undervalued these national assets and dashed them out. None is today functioning optimally. They laid off tens of thousands of workers and eventually shut their doors to business. It is the foundation of the pervasive unemployment afflicting Nigeria today. Is that the prosperity the PDP government brought to Nigerians?

“It is under the PDP government he served as Vice President that Boko Haram terrorism was formed in 2002 and nurtured into a monster by 2015. President Muhammadu Buhari inherited a country, where Boko Haram insurgents seized and effectively occupied 24 LGAs in the Northeast region.

“Boko Haram’s threat to national security was potent in virtually parts of the North, including Abuja, the FCT committing atrocities and heinous crimes against humanity. But the insurgents have been decimated and defeated under President Buhari. Only God knows what would have become of Nigeria had PDP continued in power beyond 2015.

“Elsewhere in the South-South region, the PDP government promoted and commercialized militancy. So, many militant sects sprouted and were serviced by the PDP government. Kidnap of foreign oil workers; vandalisation and blowing up of oil installations and facilities became rampant to the extent of severely disrupting Nigeria’s daily crude oil production. It dropped to an all-time low, below one million barrels per day, from 2.2 million barrels when the Buhari Presidency came on board. Is that the peace the PDP governments brought to Nigeria?

“Nobel Laureate, Prof. Wole Soyinka once infamously described the PDP as populated by a nest of killers. Till the party was pushed out of power, it made no attempt to vacate the statement either in action or words. Rather, Nigerians experienced their own brand of peace with more high profile assassinations of prominent Nigerians from Harry Marshall to the former Minister of Justice, Chief Bola Ige.

“That government saved no kobo for Nigeria. Rather, it deflated Nigeria’s foreign reserves which dropped from about $47 billion to almost zero by 2015. They piled up unpaid salaries and pensions of about six months at the federal level and left 27 states indebted to salaries and pensions. The cumulative effect was to plunge Nigeria into economic recession by the end of 2014 before they were ousted by angry Nigerian masses in the 2015 ballot. We do not pray for this sort of prosperity.

“The PDP government had access to so much national wealth, but it could not investment in critical infrastructures to attract investments. The roads, hospitals’, power generation and supply etc were in comatose or a state of disrepair. The PDP claimed spending $16 billion on power generation, but left the seat of power with 2,300 megawatts of national grid by May 2015. What manner of prosperity? President Buhari has pushed it to over 7,000 megawatts in just three years.”