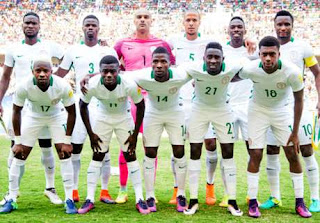 Nigeria retained its 44th place in the latest FIFA rankings released on Thursday as well as the fourth place on the African ranking.

Belgium will end the year as No. 1 ahead of world champions France in the global rankings released by FIFA on Thursday.


FIFA noted on their website that France, who were ranked No. 9 last Christmas, were the year’s “Best Mover” after a “stellar 2018…having gained more points (165) since December 2017 than any other nation.”

The governing body of world football also noted that Europe and Asia have gained top-50 places at the expense of Africa.

Europe has 31, an increase of two, Asia is up one to three and Africa is down three to five top-50 representatives.

Kosovo were the biggest climbers, jumping 46 places to 131.