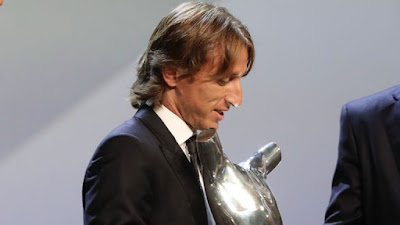 Modric, who led Real to their third consecutive Champions League and reached the World Cup final with Croatia this summer, capped off a memorable 2018 by winning European football’s oldest individual prize in a ceremony on Monday.

Modric, 33, finished ahead of Ronaldo and Antoine Griezmann for the prize, leaving Messi, who was fifth, outside the top three for the first time since 2006. Kylian Mbappe finished fourth to round out the top five.

No player other than Ronaldo and Messi had claimed the award since 2008, with both players winning five apiece over the past decade.

The former Tottenham man is the first Croatian player to ever win the award.

In September, Modric claimed FIFA’s The Best award given to the world’s top player, a prize which Messi and Ronaldo had not lost since 2008.


France Football, which hands out the Ballon d’Or, and FIFA combined their awards to create the FIFA Ballon d’Or in 2010. The two parted ways in 2016 and have given out separate awards ever since.

Other honourees on the night included Mbappe, who was awarded the first-ever Kopa Award given to the top under-21 player. The 19-year-old PSG forward became the second-youngest to ever score in a World Cup final as he helped France to their second title this summer.