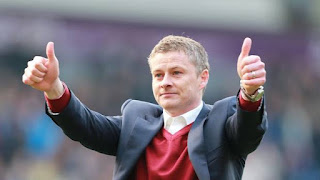 Ole Gunnar Solskjaer has been appointed as Manchester United's interim manager for the rest of the season.

The former Red Devils striker, who played at Old Trafford for over a decade between 1996 and 2007, takes over on a temporary basis in the wake of Jose Mourinho's exit on Tuesday.

A United statement read: “Manchester United announced today that former striker Ole Gunnar Solskjaer has been appointed as caretaker manager until the end of the 2018-19 season.

“Solskjaer will take charge of the first team with immediate effect and will remain in place while the club conducts a thorough recruitment process for a new full-time manager.”


He arrives from Norwegian side Molde, having returned to the club for a second stint back in 2015. Mike Phelan has also returned to United in the role of first-team coach and will work alongside the club’s former midfielder Michael Carrick and Kieran McKenna.

Solskjaer, whose appointment had been accidentally revealed late on Tuesday, told United's official website : “Manchester United is in my heart and it’s brilliant to be coming back in this role. I’m really looking forward to working with the very talented squad we have, the staff and everyone at the club."

United's executive vice-chairman Ed Woodward added: “Ole is a club legend with huge experience, both on the pitch and in coaching roles. His history at Manchester United means he lives and breathes the culture here and everyone at the club is delighted to have him and Mike Phelan back. We are confident they will unite the players and the fans as we head into the second half of the season.”

A forward perhaps best known as a "super sub" for United, Solskjaer famously came off the bench against Bayern Munich in the 1999 Champions League final to score an injury-time winner and hand Sir Alex Ferguson's side their first European honour for over 30 years.

He also picked up six Premier League titles and two FA Cups, among other honours, during his time as a player at the club.

At international level, he won 67 caps for Norway and was a member of their 1998 World Cup and 2000 European Championship squads, reaching the last 16 in the former.

Following his retirement, Solskjaer transitioned from the United playing squad to the managerial set-up, where he took charge of the reserves at Carrington under Ferguson between 2008 and 2011.

He left the club to take the reins at Molde, where he had played before switching to United, and won the Tippeligaen league title in his first season in charge, in 2011.

He was coaxed back to the United Kingdom in early 2014 to replace Malky Mackay as manager of relegation-threatened Cardiff City but was unable to prevent the club from making the drop back into the Championship.

A subsequent dismissal followed after a run of poor results to open the 2014-15 campaign and Solskjaer was reappointed Molde boss the following October on a three-and-a-half year deal.