Fr. Mbaka reveals why Why Buhari, Atiku may fail 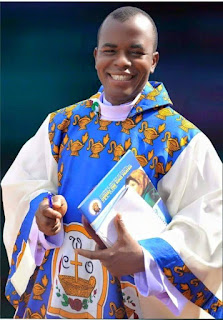 The fiery Catholic Priest and the Spiritual Director of the Adoration Catholic Prayer Ministry, Enugu Nigeria, Rev. Fr. Ejike Mbaka has predicted doom’s day for President Muhammadu Buhari and the Presidential candidate of the PDP, Alhaji Abubakar Atiku, saying that none of them would win, without mentioning the eventual winner.

Fr. Mbaka Speaking during the 2018 harvest and bazaar celebration at his Adoration Ground in Emene, he said it was bad and scandalous before the Holy Spirit that after their prayers on Adoration altar made Buhari the President, he had refused to come and do a project for his ministry as a way of thanking God.

Angry  Mbaka further narrated how his ministry’s prayers saved Buhari from deadly sickness in 2015 and said anybody with Buhari’s ears should warn him that no one cheats God, that after he thinks he is healthy, his sickness may come in another form.

Speaking in Igbo, Mbaka said: “Ask Atiku if it is these steps that the cow will take to reach Umuahia.” Mbaka concluded by requesting that Atiku should reach out to Igbo leaders like Hon. Ike Ekweremadu and also come personally to adoration ground and do a project for them.”

He also berated Atiku’s running mate, Mr. Peter Obi. Though he said they had always supported Obi, he stated that Obi had not done anything for his church.

He said God would bless Governor Dave Umahi of Ebonyi State and Ifeanyi Ugwuanyi of Enugu State and grant them second term for what they had done for him.

Fr. Mbaka curiously withheld Obi’s blessing and said he would only release it after Obi had done a project for them. Using Umahi as an example, Mbaka said: “Umahi donated 1,000 bags of rice and 1,000 tubers of yam to us, but it meant nothing to me until he handed N10 million cheque to me and promised to build a project for the ministry. This is the type of gesture we require from Obi”, he said.

While acknowledging the donation of N500,000 from Obi as his money for breaking of kolanut, he said “ stinginess is not a virtue.”

In his own remarks, the representative of President Buhari, Sen. Hope Uzodinma was warmly embraced the moment he announced N2 million for breaking of kolanut by Buhari and the announcement that Buhari will build a hospital in adoration ground for him. The elated Mbaka said that such was the type of gesture he needed from Buhari.

Responding to Hope Uzodinma’s donation of N20 million to him, he said  “Uzodimna would become the next governor by the grace of God.”

On Imo State and Abia State, he said the case of the two state’s were beyond redemption and that the two states were possessed by the devil and needed to be exorcised.

However, Mbaka reiterated the unflinching support of his ministry for the re-election of Governor Ifeanyi Ugwuanyi of Enugu State for a second term in office in 2019.

The outspoken priest stressed that the ministry has “100 per cent support for Gburugburu (Governor Ifeanyi Ugwuanyi)” saying: “It is unquestionable; Adoration Ministry Enugu Nigeria stands for him; he is a good man; a man of peace; a perfect genius; humble and ever patient”.

The thanksgiving mass was also celebrated for Gov. Ugwuanyi, other candidates of the Peoples Democratic Party, PDP, in Enugu State, members of the State Assembly, State Executive Council and PDP campaign organization, among others, to herald the commencement of campaigns for the 2019 general election as well as entrust the activities to the hands of God.

Extolling the leadership qualities of Gov. Ugwuanyi, Fr. Mbaka applauded him for uniting “all political parties” and ensuring equitable development across the three senatorial districts in the state, stating that “Enugu State has not had a leader like him”.

He maintained that the Adoration Ministry has not only given Gov. Ugwuanyi their endorsement for a second term in office but also spiritual support backed with unceasing prayers.