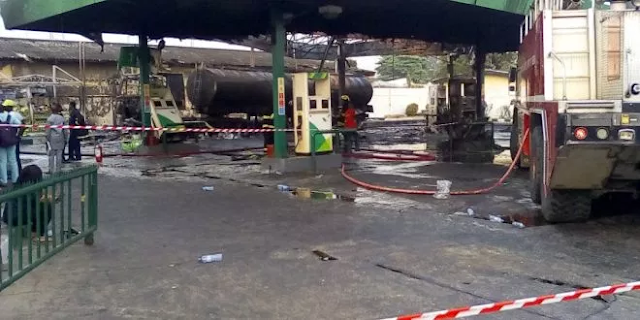 The incident triggered anxiety among passengers, motorists and passersby along the busy.

Thick smoke billowing from the petrol station filled the skyline occasioning heavily vehicular movement along the Airport Road. Scores of road users took to their heels to avoid being caught in possible conflagration as the huge flakes of smoke was seen as far as the Mafoloku axis of the Airport Road and other parts of the metropolis.

But as at the time of writing this report , the cause of the fire was still unknown.

An eye witness said the fire started about 2.10pm.

He added that already fire fighters from both the Federal Airports Authority of Nigeria (FAAN) and Lagos State Fire Service battled to put the fire under control.

As at 2.30 pm thick smoke was still coming out from the burnt petrol station and it also enveloped the area where the filling station is located

As at 2.45 pm the gridlock has reached the Concord Bus Stop area, a situation that further cause panic among commuters and motorists using the Lagos Airport Access Road.

Traffic along the Airport became unbearable.

Sources hinted that the fire incident may have forced many passengers to miss their flight on account of inability to access the General Aviation Terminal ( GAT), in the domestic wing of the Lagos Airport.