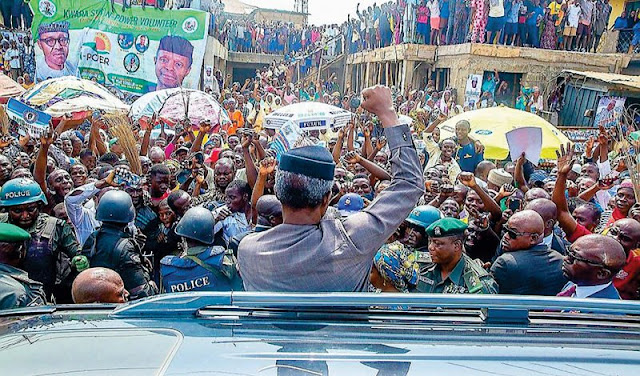 The Federal Government yesterday said it would float People’s Money Bank in the country next year.

It added that the bank, when established, will have branches in all the states of the federation for traders and artisans to have access to credit facilities.

Prof Osinbajo made the disclosure during a talk in a private radio station, Sobi FM Ilorin, after launching the programme at Ipata and some other markets in the town.

He said that there is no politics involved in the administration’s ‘Tradermoni’ micro-credit scheme.

The Vice President said the government considered petty traders for the programme because it is always difficult for them to access bank loan because of the belief that they would hardly refund.

He said though there was no collateral for the loan, refund may not be difficult with the design that a beneficiary who refunds will receive bigger one.

He explained that beneficiaries at the start are given N10,000 while after refund they receive N15,000 with the progression to continue up till N50,000.

He said that the government targeted a total of two million petty traders across the states of the federation for the programme with minimum of 30,000 beneficiaries per state.

He said contrary to the criticism that the government launched the programme at election time, the programme started in 2016 and fully took off after the National Assembly approved money for it about seven months ago.

Osinbajo said the programme was for the benefit of the masses, petty traders, saying that once the people enjoy the benefit, it is out of place to be complaining about the timing, asking: “Is there any time wrong to do the right thing?”

He denied that the micro credit was being given to only members of the APC, saying that beneficiaries are not considered on account of party affiliations but on merit.

“It is false that only members of the APC are being considered for the money. Nobody even asks anybody about his or her party or trying to know whether you are APC or PDP. Even those who belong to no party are part of the beneficiaries,” he stated

He said that the Marketmoni version of the micro credit programme meant for artisans and marketers of higher status would commence with N50,000 for the beneficiaries and explained that the people could receive up to N300, 000 when they do not derail in refunding.