Buhari may present 2019 budget to NASS next week 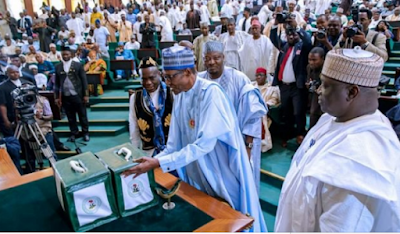 President Muhammadu Buhari may present the 2019 Budget to the National Assembly next week.

But the lawmakers said they have not received any official communication  from the President.

According to a top source who spoke in confidence, the Senior Special Assistant to the President on National Assembly Matters, Sen. Ita Enang, has already opened up talks with the National Assembly leadership.

The source said: “The government is looking at next week for budget presentation by the President. The Senior Special Assistant to the President on National Assembly Matters, Sen. Ita Enang, is already liaising with the leadership of the assembly.

“So far, the Assembly leaders have not suggested any convenient date. Once we are able to mutually agree on a date, the President will officially write the legislature.

“We want to lay the budget before the National Assembly goes on recess  for Christmas and New Year. As a matter of fact, we are looking at either Wednesday or Thursday.

“With the FEC approval of the budget, the President will write the lawmakers accordingly.”

The Chairman, House Committee on Media and Public Affairs, Hon. Abdulrazak Namdas, said the National Assembly is awaiting official notice from the President.

“Until we receive official communication from Mr. President, I cannot tell you the date the budget will be presented to the joint session of the National Assembly. So far, we have not heard from the President,”he said.

He was with the Minister of Information, Lai Mohammed.

“We are hoping that as soon as possible, it would be presented. We will be in touch immediately with the National Assembly to fix the date. The budget is ready,” he said.

When asked the details of the budget, he said: “It is the President’s budget. He presents it to the National Assembly.”

The meeting had approved a budget estimate of N8.73tr for the 2019 budget, N400bn lower than that of this year.

The price of crude oil per barrel was fixed at $60, while exchange rate at $305 and daily crude oil production was put at 2.3million by the FEC.

The MTEF/ FSP was designed to translate  strategic development objective of the economic recovery and growth plan into a realistic and implementable budget framework.