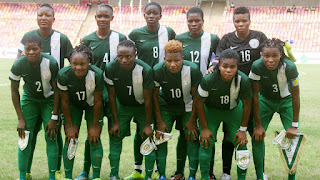 Tochukwu Oluehi was the hero as Nigeria claimed the African Women's Cup of Nations for a record ninth time after defeating South Africa 4-3 on penalties after a keenly contested 120-minute that ended in a goalless stalemate in Accra, Ghana.

The Super Falcons goalkeeper was impressive throughout the encounter and saved the decisive penalty to complete a Nigeria comeback.

Onome Ebi had missed Nigeria's first kick of the shootout before Oluehi provided a stunning save to deny Linda Motlhalo, thus, securing victory for Nigeria.

Thomas Dennerby made a change to his team, teenager Rasheedat Ajibade taking the place of Desire Oparanozie while Chrestinah Kgatlana continued to lead the line for Desiree Ellis’ side.


Record winner Nigeria controlled proceedings for the most part of the game while the South Africans were organised and, as such, successfully contained them throughout.

Ellis’ approach saw her side try to exploit the defensive partnership of Ebi and Osinachi Ohale with the speed of Kgatlana . However, the latter two appeared ever ready for the tournament top scorer in 120 tough minutes.

Super Falcons started on the front foot and in the third minute, Oshoala, after picking the pocket of a South African midfielder, shot tamely at Kaylin Swart, who provided an unassured save.

Her opposite number Oluehi was first called to action in the 13th minute, parrying a dipping long-range free-kick from Mamello Makhabane. Okobi then showed great skill to pull away from Leandra Smeda, but the quality of her finish was in stark distinct.

The attacking midfielder had a better attempt at Banyana Banyana’s goal after some good work from fleet-footed winger Francesca Ordega, but Swart was equal to the task.

But for a bad first touch, Ajibade would have put the Falcons ahead before the half-time break after Swart's clearance off an Okobi outswinger fell for her.

Three minutes after the restart, livewire Ordega - benefitting off Ajibade's tame shot - again caused panic for South Africa's defence but her crisp strike was whiskers away from the target.

Nigeria fluffed their best chance to get a much-deserved lead with Oshoala firing her penalty wide after Swart had upended Ordega in the box as the game proceeded into extra time.

Oluehi made light work of substitute Nompumelelo Nyandeni's left-footed shot in the first real opening of the extra 30 minutes.

And Swart again denied Oshoala a goal, pushing the ball to safety before Kgatlana almost secured the trophy for South Africa after waltzing through Nigeria's defence but shot straight at Oluehi.

The goalkeeper showed her quality calmly saving fierce efforts from Motlhalo and Makhabane to keep the Falcons in the game as Banyana's search for a first Awcon title only had to stretch to the penalty shootouts.

Oluehi only had to wait till the last spot kick, providing a stunning diving save to Motlhalo's kick to win a record ninth continental trophy for Nigeria in a record final.