"Why N’golo Kante may be leaving Chelsea" 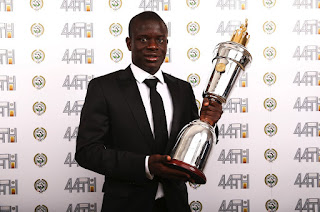 A former Chelsea star, Tony Cascarino, has said that the club’s midfielder, N’golo Kante, will leave the club.

According to him, this is due to the Frenchman’s continued struggle in his new position under Maurizio Sarri.

Kante is arguably the best defensive midfielder in the league since his arrival in English football in 2015.


However under Sarri, Kante’s position has been changed to accommodate summer signing, Jorginho, and his performance levels have dropped as a result.

Cascarino is of the view that should Kante’s struggles continue, he could seek to leave Stamford Bridge in the summer.

“I don’t think Sarri’s comments about Kante being more technical were too much to be concerned about,” he told talkSPORTS.

“I think the bigger issue with Kante is they have given him a new contract because they know so many clubs are sniffing around him, but he’s being played out of position.

“I think certainly PSG would be in for him as well as other clubs, and why wouldn’t they?

“He’s the best at his position in the world, without a doubt, for me.

“That’s why he signed a new deal, but I don’t believe it will be enough to keep him there if Kante plays in that position all season.

“I think by the end of the season he might have had enough, knowing he’s a far better player in the positions he is more accustomed to.”

On Wednesday, Sarri hit out at Kante for not performing his role well enough in the 3-1 defeat to Tottenham.

“Kante, in the last match, wanted to solve the match after the first 15 minutes but in the wrong way,” Sarri said.

“He lost his position. He attacked too much the other box.

“And I think this is not one of the best characteristics of Kante. Maybe it’s only a question of time.

“But Kante has to stay near to Jorginho, especially when the ball is on the other side.”