VAR to be used in CAF Champions League final 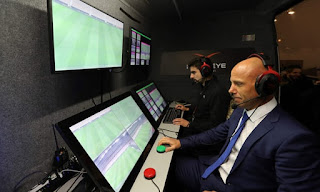 Video assistant referees (VAR) will be used in the CAF Champions League final for the first time on Friday when Al Ahly of Egypt host Esperance of Tunisia in the first leg.

VAR has been used once before in Africa, for the 2018 CAF Super Cup match between Wydad Casablanca of Morocco and TP Mazembe of the Democratic Republic of Congo.

While VAR has been both lauded and loathed by footballers and officials, its use at the World Cup in Russia this year was considered “largely successful” by FIFA.


“We used it for the Super Cup last February without any hitches and are delighted to go a step further,” CAF general secretary Amr Fahmy said.

“This is another historic moment for African football. CAF is determined to use the latest innovative technologies available.”

The most controversial refereeing decision came in a 2010 semi-final when Nigerian Michael Eneramo clearly handled when scoring the goal that won the tie for Esperance.

It was scant consolation to Ahly that the Ghanaian referee who allowed the goal to stand in Tunisia was banned.

Ahly and Esperance go into the two-leg title decider — the second leg is on November 9 in Tunisia — knowing a great deal about each other having also met in the group stage.

After a 0-0 draw in Egypt, Ahly won the return match 1-0 through a goal from Morocco-born Walid Azaro, one of six he netted in the Champions League this season.

Anice Badri of Esperance has scored one more with his seventh coming five minutes from time to secure overall victory in a dramatic semi-final against Primeiro Agosto of Angola.

Other potential match-winners in Alexandria and Rades include Haythem Jouini of Esperance, who has come off the bench to score vital goals.