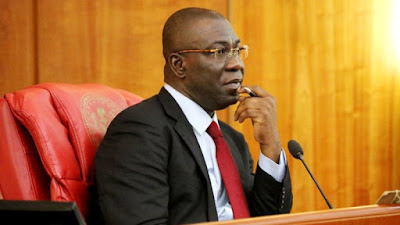 Mohammed Yusuf, who led members of his gang to rob the home of Deputy Senate President, Ike Ekweremadu, has said he did not know the house they went to belonged to “a big man”.

The 25-year-old suspect said this when he was paraded at the Police Force Headquarters in Abuja, yesterday night.

He also said they did not find any security personnel on duty at the time they got to the house.

Yusuf, who spoke in Hausa Language, said through an interpreter, that they scaled the fence and had unhindered access into the compound and entered one of the rooms with the aid of a jack used in changing tyres.

The suspect said they went into Ekweremadu’s house to look for money, but said he ended up with nothing as he was eventually caught while other members of the gang escaped.

He said: “Upon entering the room, we met Ekweremadu’s son, who tactfully took them to his father’s room and started calling ‘honey, honey’ and his father opened the door.

“We had thought that the young man was calling his wife to open the door for him, only to find a man.”

Parading the suspect before newsmen, Force Public Relations Officer, Jimoh Moshood, insisted that police investigation carried out so far did not reveal any assassination attempt on Ekweremadu’s life. Rather, he reiterated it was a case of burglary and attempt to commit robbery in the residence of Ekweremadu’s residence.