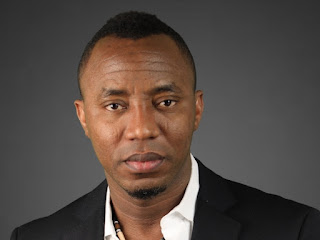 The political fund-raiser inaugurated on GoFundMe by the presidential candidate of the African Action Congress, Mr. Omoyele Sowore, has generated $97, 226 out of the $2m mark.

The amount was raised by 1,168 people in eight months, the site says.

Omoyele had told his audience that if 10,000 Nigerians and friends of Nigeria could each donate $200, the goal would be reached. However, the donations, so far, range from five dollars (lowest) to $650 (highest).


Sowore, who is contesting the presidency with the slogan, ‘Take Back Nigeria Movement,’ said he inaugurated the online platform “to raise funds via a clean, transparent and open manner.”

He had written, “Nigerian People! Our goal is to raise $2 million via a clean, transparent and open manner in order to advance our movement and fund our election into the Presidency without the interference of Godfathers and Godmothers.”

As more people showed interest, they also tweeted and shared the appeal on social media handles, while Sowore intimated donors and other stakeholders of the fund-raiser progress.

As the money came pouring in, Sowore derided those he called “political elites,” saying, they “are already shaking in their boots, realising that their choke-hold on Nigeria’s destiny of greatness is about to end.”

He also intimated his ‘constituency’ of the activities of his party. “We have done major town halls that have reached millions of people across Nigeria and beyond.

“These Nigerians are desirous of a complete sanitisation of the political order in Nigeria,” he said.

In the last update on his fund solicitation platform 16 days ago, Sowore discussed his vice presidential candidate, one Dr. Rabiu Ahmed Rufai.