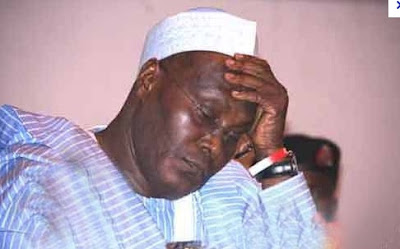 Presidential candidate of the Peoples Democratic Party, Atiku Abubakar, has applied for a visa to enable him to visit the United States, our correspondent learnt on Thursday.

It was learnt that the former Vice-President appeared for an interview at the US Embassy on Tuesday in Abuja.

Our correspondent learnt that Atiku would use the trip to make what was described as “political statement” ahead of the 2019 presidential election.

According to our source, those planning the trip with the former VP are out to use it to address some US congress caucuses, as well as a high ranking official in the Donald Trump administration.


However, our source could not confirm if Atiku would also use the opportunity to address the entire congress if he makes the visit.

The source said, “I can authoritatively tell you that Atiku Abubakar went to the US Embassy on Tuesday for an interview and there is hope that he will get it (visa).

“When he gets it, we will use it to make a political statement. This is because those saying he can’t travel to the US will be shamed.

“Apart from that, the trip will be used to sell his candidature and that of the PDP to the entire world. So, let us wait and see what will happen. The PDP and Atiku are ready for the 2019 race.

Reacting to the development, the Federal Government warned the US to be cautious about granting Atiku a visa now.

It said this was necessary in order not to create the impression that the PDP candidate had been endorsed by America for the 2019 election.

Minister of Information and Culture, Alhaji Lai Mohammed, gave the government position at an interactive session with journalists in Abuja on Thursday.

Mohammed, who spoke in his office, said the government was aware of the move by the ex-VP to allegedly lobby the US to lift the visa ban imposed on him.

He said, “We understand and appreciate the fact that it is the prerogative of the US to grant a visa to anyone who applies.

“However, we want the US to be neutral and be wary of taking any decision that will give the impression that they are favouring or endorsing one candidate over the other.

“An impression must not be created that the US government is endorsing one particular candidate over the other.”

The minister alleged that for years, there had been a kind of congressional bi-partisan investigation into the corruption (allegations) against certain individuals, which had made it difficult for Atiku to secure a US visa.

Speaking on security, the minister insisted that despite the recent setback brought about by attacks on the military, Boko Haram had been largely decimated.

On the arrest of Deji Adeyanju, convener of Concerned Nigerians by the police, the minister said “being an activist or in the opposition does not protect anyone from arrest and prosecution’’.

He said the case had been charged to court and it would be prejudicial to make further comments on it.

Meanwhile, the PDP has alleged that the All Progressives Congress “is already jittery because of the calamity that will soon befall them”.

National Chairman of the party, Prince Uche Secondus, who spoke with our correspondent on Atiku’s application for a US visa, asked the APC and FG to be ready to accept defeat in the February presidential election.

He said, “What is their own in the visa that they are calling on the authorities of another country not to grant a private citizen?

“The fact is that the APC government has failed. They are already jittery. They know that the game is up and that’s why they have been running from pillar to post.

“Tell them that their days of deceit are over. Nigerians are tired of them and they can no longer lie or take the people for a ride anymore.”