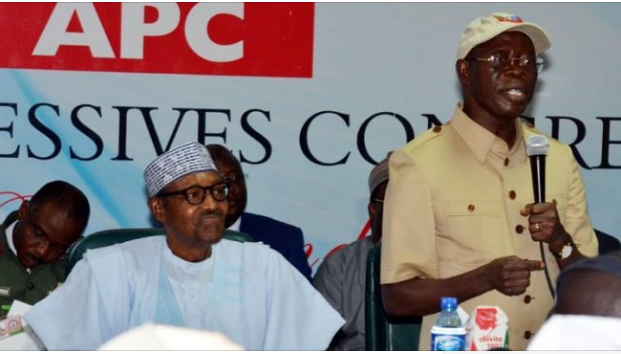 The National Chairman of the All Progressives Congress (APC), Adams Oshiomhole, has dismissed allegations that he collected bribes of about $80 million to manipulate the outcome of the party primaries in some states and FCT.

Some aggrieved aspirants are accusing Mr Oshiohmole of collecting various sums in bribes to twist the primaries.

Speculations are also gaining currency that he was last week interrogated by the Department of State Service (DSS) over the outcome of the recently conducted APC primaries.

An online media outfit which allegedly accused the APC chairman of collecting about $80 million in bribes, however, reported that Mr Oshiomhole had become a target after refusing $500,000 bribe cash from one of the aggrieved APC governors.

It reported that the affected governor had wanted the APC chairman to adopt his anointed governorship candidate.

It was gathered that many godfathers and governorship candidates were desperate for tickets but Mr Oshiomhole stood his ground that he will not compromise party guidelines, it further stated.

But, Mr Oshiomhole, who spoke to State House correspondents after a closed door meeting with President Muhammadu Buhari at the Presidential Villa, described the allegations of corruption against him as reckless insinuation.

“No tree that will bear fruits that will grow in Sahara desert and the fact the publisher of Saharareporters himself is a presidential aspirant; we would soon find out the difference between Sahara and its reporters, and a green forest and its reporters.

“The unfortunate thing here, however, is that people, who specialise in libels they take advantage of our peculiar judicial system.

“When I was a governor in Edo state, they published all kinds of things against me. At a point I decided to go to court and my lawyer told me that I have to be ready to enter the witness box to make my case – whether I was ready to go through that humiliation.

“What is in the governorship? Before I became the governor I entered the witness box and I know after being governor I can still go back there one day. So I went there and I won the case. They awarded damages in my favour.

“But by the time you want to check the process of the guy who libeled you and so on, he sells himself everything put together he could not compensate for by legal fee not to talk of really mitigating my paying as a result of the judgment,’’ he said.

On the forthcoming campaign programmes of the APC, Mr Oshiohmole revealed that the party’s campaign for the 2019 presidential election would focus on character and integrity of the key candidates.

According to the party chairman, the APC is fully ready to flag off the campaigns soon.

He said: “We are fully ready, we have done with our primaries and filled our nominations.

“As you know, INEC still has a window between now and first of January to deal with issues of substitution. As of campaigns, we are ready.

“We are going to announce the date and programme for our campaigns. My idea of kick-off will be the day we will do our first presidential rally where Mr President as our candidate and other candidates, party leaders will assemble in a venue that will be agreeable to all of us.

“There will be two sets of messages. One, on what we have done in the past, without failing to remind people of where we were before, what we are going to do in the next four years, and a couple of things we believe we will be doing differently.

“Central to the issue and given our past experience as a country, we know that what makes a difference is the character, the issue of integrity of the candidates.’’

According to Mr Oshiomhole, the campaign is going to be focusing on character and integrity of those who want to govern the country.