Oshiomhole hits Atiku, Saraki, reveals why there are killings in PDP states 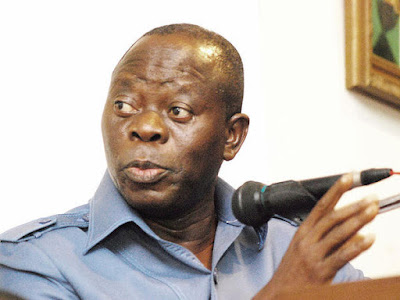 The National Chairman of the All Progressives Congress (APC), Adams Oshiomhole, has claimed that the killing of APC members in the Peoples Democratic Party (PDP) states were politically-motivated.

Speaking with newsmen after a meeting of the party’s National Working Committee (NWC) on Tuesday, the former Edo State governor also slammed the PDP presidential candidate, Alhaji Atiku Abubakar, over his promise to create millions of jobs annually.

On the allegation of politically motivated killings in PDP states, Oshimohole said: “The third issue we discussed is a very disturbing development in some states where the PDP is using the state instrument, misusing the police the way they like to undermine the basic democratic rights of the APC in those states they feel they are in charge.

“A typical example is what happened today in Akwa-Ibom where the Commissioner of Police colluded with the state governor to force the APC out of the state’s House of Assembly.

“The Commissioner went beyond the bounds of his duty to aid and abate what was clearly wrong. It is not the business of the police to assist the political authorities to effect their own biases.

“We are also witnessing some sad developments like few weeks back when the state chairman of the APC in Enugu State narrowly escaped assassination but unfortunately his police orderly was not so lucky as he was shot at and hospitalised.

“In Rivers State, two members of the House of Assembly were abducted and one of them found dead.

“We do not think that these are normal criminals but we are beginning to wonder the way which our party leaders, particularly in states we found not have governors the way they gone under attack, violent and even assassination.

“These are, for me, very dangerous signals and we want to appeal all those active in the political process that we must respect the right of every Nigerian to belong to party of their choice,” he said.

Celebrating the victory of APC in Kwara State and the downfall of Saraki, he said, “For me, even more outstanding is the humiliating defeat Saraki suffered in the hands of Kwara people who are determined to dismantle the Saraki failed attempt to install his own variance of a political culture of which he is the only constant decimal.

“I think the good people of Kwara state have dealt him a big blow as the proclaim leader of the opposition PDP and he has had to lead the campaigns to so many other places.

“Now here is a native doctor who was busy going to other states now unable to heal his own people.

“That defeat in Kwara State as far as we are concerned particularly by person he did not put in place to stand election means a lot to us.

“We are not going to accept a Nigerian variant where a minority party preside over the affairs of the National Assembly whether as dictated by Bukola Saraki as as represented by Yakubu Dogara in the House of Representatives of the PDP because it is not right.

“In his own case what the people of Kwara have done to him is that they are going to politically bury him come February next year and he has seen the first warning.

“I am sure Saraki would be politically retired by the good people of Kwara that he has mismanaged their economic and political rights over the years.

“So, I am very excited about that and we think that this is something worth celebrating and we took time to celebrate it today,” he said.

On Atiku’s promise to create jobs, he said: “People should market themselves by telling us why we should trust them, particularly since there are no new players on parade.

“Everybody that l know of on parade have at one time or the other been in government.

“If you are going to create 10 millon jobs, how come that when you were in government before and you produce a SEED document where you promised to create seven million jobs, by the time when that government was out, we had lost Micheline, Dunlop, closed down entire textiles industries, we witness unprecedented industrial obituary. Factories were closing one after the other.

“So, these are the issue we really want to engage. It is going to be a very interesting season for the media.

“They have to play back what people are saying and to compare what they did when they have the opportunities.

“I think that there will be more to keep us busy rather than to resort to primitive tactics of arm twisting of harassing and using thugs to intimidate state leaders of our party,” Oshiomhole quipped.