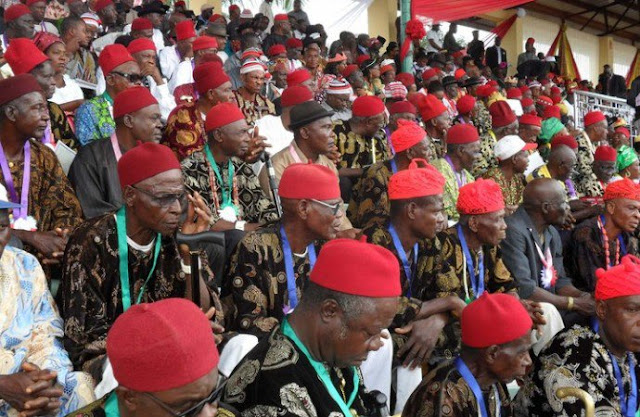 The apex Igbo socio-cultural organization, Ohanaeze Ndigbo, Friday, says it has not adopted any candidate for the upcoming 2019 presidential election in the country.

This followed the endorsement of the Presidential flag bearer of the Peoples Democratic Party,PDP, Atiku Abubakar, in Enugu during the gathering of Igbo leaders on Wednesday.

The group said it was yet to meet and decide who to support in the forthcoming presidential election.

Ohanaeze, in a statement issued by the Deputy National Publicity Secretary, Mazi Chuks Ibegbu, on Friday, dismissed the report that the gathering of the Igbo leaders in Enugu, and the endorsement of Abubakar, the PDP presidential candidate, were facilitated by the group.

The apex Igbo body, although admitted that the President General, Chief John Nwodo attended the Enugu meeting, said that was not the position of Ohanaeze.

The statement reads,” Ohanaeze Ndigbo has not yet adopted any Presidential candidate as some media houses recently reported.

“The visit of the presidential candidate of the Peoples Democratic Party, Atiku Abubakar to some Igbo leaders in Enugu was not facilitated by Ohanaeze Ndigbo, though the President General and some chieftains of Ohanaeze Ndigbo were present.

“It was a town hall meeting organised by some friends and associates of Al.h Atiku Abubakar and Peter Obi, his Vice Presidential candidate and Ohanaeze leadership was invited .

Of course, Ohanaeze Ndigbo is non-partisan but we cannot shirk our responsibility to ensure that the right people are in power for the benefit of Ndigbo and all Nigerians.

“We are elated, however, by the promise of Atku Abubakar to restructure Nigeria and address the visible marginalisation of Ndigbo in Nigeria.

“Ohanaeze Ndigbo will early in January 2019 organize stakeholders and Imeobi meeting to decide the political trajectory and direction of Ndigbo in 2019”.