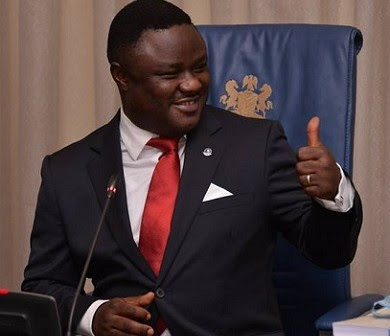 The Governor of Cross River State, Prof Ben Ayade, says his re-election for a second term in 2019 was a foregone conclusion.

He stated this on Wednesday at the exco chamber in his office during a parley with journalists in the state.

“Elections are two months away and Cross River is not feeling anything because there is no opposition.

The governor stated that with all his achievements and employment of over 6,000 aides and still counting, he believes he will be re-elected in 2019.


“I am not campaigning because I am concentrating on the projects I am executing,” he said.

He said he plays politics with ethics and valued his father’s name than the office of governor he occupied.

Ayade also spoke about how he inherited a state neck-deep in domestic and foreign debts and was in recession, adding that he had to create a brand new source of income through his industrialisation drive.

He said industrialisation was to support tourism which was not generating much income for the state because the purchasing power of the people of the state was low.

He spoke about progress of his projects such as the deep seaport, the N8 billion Calasvagas, the power plant, the superhighway, saying after 80 petitions, the EIA have been finally approved and that the 276km superhighway has been split into 50km each to enable investors to take portions they could execute and toll after completion.

Ayade also said all equipment for biofertilizer plant had arrived and after they are installed the people of Calabar will receive cash for their trash.

He said all efforts and huge spending to revive Tinapa have failed because of macro economic factors, adding that he has spent billions of naira on the monorail yet it is not profitable because people are not patronising Tinapa as they should.