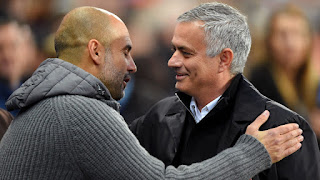 Manchester United manager Jose Mourinho clung onto the positives after a derby loss to Manchester City that surely ends their faint title hopes.

Just days after securing a memorable Champions League comeback win at Juventus, the 177th Manchester derby went the way of the hosts in a largely one-sided Premier League encounter.

David Silva’s early goal was added to by Sergio Aguero just minutes into the second half, only for Anthony Martial to reduce the deficit from the penalty spot and bring back memories of United’s famous comeback in April.

But Mourinho’s men were unable to stave off defeat at the Etihad Stadium, where substitute Ilkay Gundogan
wrapped up a 3-1 win.


Defeat means United are as close to Cardiff in the relegation zone as league-leading City – a 12-point gap that was mentioned to Mourinho when asked whether their title hopes were over.

“I think we are not going to be relegated,” the United boss said brusquely, before offering an upbeat analysis of a game in which Martial’s penalty was their only shot on target and their goal difference went into negative figures.

“So, when I analyse the game today, I think the difference was, you can go for stats,” Mourinho said.

“That’s the way people that don’t understand football analyse football, is with stats.

“I don’t go for stats, I go for what I felt and I watch in the game and the game was there until minute 80-something.

“We made mistakes, we were punished by these mistakes, but the performance, the mentality, the togetherness, the belief, the fight until the end was something that we are building and we are not going to lose that because of a defeat.”