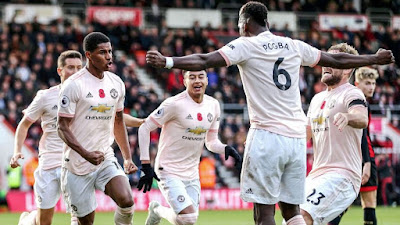 Marcus Rashford scored a winner deep into stoppage time as Manchester United snatched a victory against Bournemouth at the Vitality.

The Cherries were by far the better side in the first half and took the lead on 11 minutes through in-form Callum Wilson. However, despite being on top, they failed to add a second and allowed United to equalise against the run of play.

In typical recent fashion, Jose Mourinho's men started slowly; and they were lucky not to go behind inside five minutes when Wilson played in Ryan Fraser, whose tame effort was comfortably saved by David De Gea.

But the visitors failed to heed the early warning signs and fell behind six minutes later when Wilson continued his impressive early-season scoring form as he made it 1-0.. United failed to properly clear a corner and left a gaping hole down the left-hand side, which Bournemouth ruthlessly exploited.


Junior Stanislas played a perfectly weight ball across the United six-yard box which was begging to be turned home -- and Wilson duly obliged.

Bournemouth were all over the visitors following that goal and both Fred and Paul Pogba were guilty of fouls borne purely out of frustration and not being able to get hold of the ball, with Luke Shaw lucky to not concede a penalty.

However, against the run of play, United created an opening with their first move of any substance, which was finished off by in-form Anthony Martial. Alexis Sanchez -- who was starting in place of the injured Romelu Lukaku -- worked tirelessly in midfield to win the ball and played it to Young. The stand-in United skipper then fed Sanchez down the right-hand side and the ex-Arsenal man knocked the ball across the box for Martial to fire United level 10 minutes before half-time.

The goal seemed to completely galvanise United and they came out for the second half a different side.

Mourinho brought on Ander Herrera and Rashford just before the hour mark to great effect, with the Spaniard bringing extra energy in midfield after replacing Fred; and Rashford should have scored when presented with a glorious opportunity on 65 minutes.

Young's free-kick cannoned off the post and the United man's goal-bound effort was sensationally blocked on the line by the chest of Nathan Ake.

And, deep into added time, Rashford bundled in a winner as Bournemouth failed to deal with Pogba's cross.