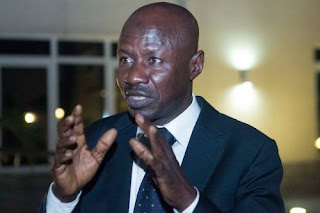 In the story of the ‘Old Man and the Sea’ brilliantly scripted by Ernest Hemingway, courage, determination and perseverance are all the sustaining power of Santiago, the valorous   fisherman, who was tormented for 84 days and left at the mercy of the elements of a virulent sea populated by dangerous predators bent on carting away whatever catch he makes.

Although the vicious attacks by sharks strained Santiago to the limits and drained his fortunes as a gifted fisherman, the old man struggled to return home with the skeleton of the greatest catch of life to the admiration of distraught family members, friends, associates and tourists, becoming a hero of some sort in the end.

The story of Ibrahim Mustapha Magu, who was promoted from Deputy to substantive Commissioner of Police in April this year and deployed by President Muhammadu Buhari in November 2015 to head the Economic and Financial Crimes Commission, bears similarity to the Old Man and the Sea.


Clearly, although Magu is cut out for the job, having been a security man for many years and having spent many of his working years with the EFCC from the days of Nuhu Ribadu, the forces never wanted him there because of what he knows about the business.

Thus,   by the time Buhari announced his name as the nominee for the EFCC job in an acting capacity, Magu was like a Daniel thrown into the lion’s den.   Although he says he is ready to lay down his life for the job he so loves so much, in his altruistic bid to ‘kill corruption before corruption kills Nigeria’, the forces arrayed against him have become so ferocious that he now cuts the image of a bewitched soul, straddled by enemies within and without and left at the mercy of his traducers, who are frontally opposed to Magu as a person, the crucial task assigned to him by the president and the techniques he has deployed to get the job done.

Even Buhari   has been hit below the belt by the turn of events surrounding Magu’s choice and confirmation, leaving him tongue tied.   He has faced a revolt from within his inner circles and the National Assembly over the choice of the Borno State-born policeman in that when   he   appointed him as the Acting Chairman of the EFCC, he had taken it for granted that his confirmation by the Senate which is controlled by his party, the APC, would be a walkover. But he was dead wrong! Buhari did not also suspect that even within his cabinet, some well-placed persons, like the deposed Director General of the Department of State Service, Lawal Daura, a close associate, would stand on the way   of Magu’s confirmation, not once, not twice, thereby questioning his integrity.

In a bid to prevent the Senate from confirming Magu, the DSS prepared a 14-paragraph ‘Security Report’ on Magu, and sent it directly to the Senate President, Bukola Saraki, through the National Security Adviser. Magu labeled the report mere fabrications.

But the presidency was bent on retaining Magu and later resent his name to the same Senate, which also used the same security report represented to them by the DSS to reject the nominee for the second time in three months, making it abundantly clear that lawmakers would not ratify Magu’s appointment at any rate and that there was no need to continue to seek their endorsement.

The Vice President, Yemi Osinbajo, who actually forwarded Magu’s name to the Senate when Buhari was outside Nigeria at the time, made it abundantly clear that despite the rejection of Magu’s nomination by the Senate, something he saw as an affront on the president, Magu would remain the chairman of the EFCC as long as Buhari remained the President of Nigeria.

While addressing journalists on Monday to mark his three years in office, Magu beat his chest in self adulation, jostling from one end of the table to the other with a sense of accomplishment, saying,  “Acting capacity does not hinder me from performing. I’m focused in getting the job done rather than lobbying to be confirmed as chairman.   I have worked here for three years and nobody can erase that record. I am not worried about non-confirmation.

“For me, it was an auspicious opportunity to contribute my quota to Mr. President’s vision of a corruption-free nation.

“The opportunity to fully subscribe to President Buhari’s mantra to “kill corruption before it kills us”, was for me, the highest call to duty – one that required absolute commitment and passion.

“Indeed, the task of fighting corruption in Nigeria has never been, is not and can never be an easy one. The battle to make our dear country a place where foreign investors will be confident to invest in is, without doubt, one that must be fought by all Nigerians who love this country, if we are to make any appreciable progress.

“Perhaps, it is fair to describe the task of championing the anti-corruption crusade as one of the most difficult jobs in the world, because corruption always fights back viciously on many fronts. I have experienced this first-hand.

“Recall the many battles we have fought over the past three years: recall the monumental challenges that the corrupt people and those who aid and abet them have placed on our path; recall that during this period, armed men attacked and strangled a police man on guard duty at my farmhouse.

“Recall also that across the country, EFCC offices and officers including operatives, lawyers and media personnel have been physically attacked in the course of the discharge of our duties.

“Then also, recall the unprecedented vilification we have endured, for the simple reason that we answered the national call to service.

“Notwithstanding all that, we can still say that overall, for us as an anti-graft agency, it has been, so far, so good. The past three years have been very eventful, and in spite of the obstacles, we have consistently made progress in the areas of convictions, and particularly the recovery of assets stolen from our commonwealth.

Magu, who flaunted the achievements of his three-year stewardship before journalists in his imposing office in Abuja, announced that EFCC under his watch recovered N794 billion, $261 million, £1.1 million and 407 mansions from looters.

Magu also said that the commission convicted no fewer than 703 corrupt persons and institutions within the period under review.

“Ladies and gentlemen, in the past three years, we have set recovery records to the envy of virtually all law enforcement agencies in Africa.

“Hundreds of properties such as filling stations, petroleum products, land, jewellery, automobiles, real estate, vessels, hospitals, company shares and heavy machinery and broadcast equipment have been seized from corrupt elements between 2015 and 2018.

“Plots of land seized sums up to 98 of which 56 are under interim forfeiture, while 42 have been forfeited finally to the Federal Government.

“Two hundred and fifty nine (259) automobiles have been seized, 35 are under interim forfeiture while 224 have been forfeited finally.

“Also, Base Transceiver Station (BTS) equipments in 36 sites across five Eastern States were forfeited finally on orders of court.

“A host of other machinery/equipments have been seized on interim basis, while we have obtained final forfeiture orders in respect of others. Jewellery worth millions of naira has been seized and is under interim forfeiture,” he boasted.

Notwithstanding the feat recorded by Magu, his joy may never be complete without being given the appellation of a substantive chairman of the EFCC. That perhaps, aptly explains why Magu hardly smiles despite the array of ‘achievements’ he reeled out in three years. But like Daniel in the Bible and Santiago, the old fisherman in Hemingway’s book, and considering the orchestrated fights, twists and turns, which he has had to grapple with in the last three years, he may well console himself with the reality that his situation could have been far worse if not for the explicit support he continues to enjoy from the corridors of power.

If not for anything, the words of the French writer, Michel Foucault, “We need to cut off the king’s head”, must not be lost on Magu. He needs to understand that fighting crime and graft is not a tea party and cannot be won on a platter. Magu and his men must realise that while mere survival in Nigeria is a difficult task, fighting corruption, which has been deeply entrenched in the culture of the people, requires raw courage and tact.

While the commission should not in any way try to appease anyone in the war against graft in order to save Nigeria and its people, it should however bear in mind the admonition of Thomas Hobbes that: “The condition of man is a condition of war”.

But Magu must also be concerned about the opinion of many Nigerians who see the fight against corruption as one sided. Many government officials accused of corruption are hardly investigated. Many also in the ruling party accused of corruption are hardly invited or arrested by security agents. This gives some credence to those who believe that the anti-corruption fight is one sided. Magus must do himself and the government her serves the favour of debunking this through action.