7:12 AM CuteNaija 0 Latest News in Nigeria 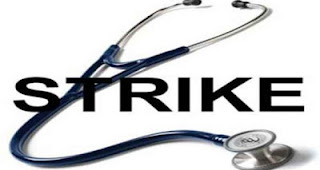 Resident doctors at the Lagos University Teaching Hospital, Idi-Araba, on Thursday began an indefinite strike in protest against the hospital management’s failure to pay them in the last three months.

The President of the Association of Resident Doctors, LUTH chapter, Dr Olawale Oba, in an interview with newsmen, said the strike was the doctors’ last resort after making efforts to press home their demands.

“The last time salaries were paid to resident doctors, consultants and house officers at the hospital was in August. No salary was paid in September and October. November is almost coming to an end and there is no salary yet. It is an indefinite strike until our demands are met,” Oba said.

As the strike commenced on Thursday, the hospital management said that a shortfall in its budgetary allocation led to the non-payment of the doctors’ salaries.

When our correspondent visited the hospital on Thursday, the doctors were seen attending to patients. But the ARD President said, “It is the first day of the strike. Something of that nature is expected and the truth is that you will find patients everywhere because they may not be aware of the strike.

“There are patients, but no resident doctor is attending to them. The doctors that you see working now are consultants. They will continue until they hold a meeting to make their own decision,” Oba said.


However, in an interview with the News Agency of Nigeria, the LUTH Public Relations Officer, Mr Kelechi Otunme, said the three-month outstanding salaries followed the insufficient allocation earmarked for personnel in the institution’s annual budget.

He said the LUTH management had engaged the Ministry of Finance and other appropriate ministries to correct this shortfall, stressing that efforts had reached an advanced stage to resolve it.

“The management will continue to dialogue with them (resident doctors) and other affected doctors in the hospital to resolve this issue.

“The hospital’s doors remained open for service while discussions and negotiations continue and there may be delay pending the return of the affected workers to work,” he said.