As it Happened: South Africa 1-1 Nigeria 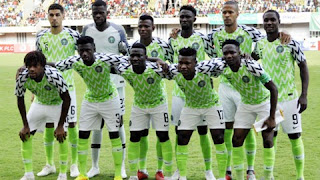 Hello and welcome to the live commentary of the 2019 Africa Cup of Nations (Afcon) qualifier between South Africa and Nigeria at the FNB Stadium in Johannesburg.

Lets take a look at how the two teams line-up this afternoon starting with the hosts, South Africa.


The draw 1-1 sees Nigeria book their place in the 2019 Afcon finals which will be hosted by Cameroon. Thanks for joining the live coverage of the match!

89' Hlanti finds his Bafana team-mate Mkhize with a beautiful cross and the latter header heads wide of the target.

85' Both teams are now pushing for a late winning goal with five minutes left on the clock.

83' Success scores for Nigeria, but the bulky forward is ruled offside after the hosts' defence was exposed.

81' Hlatshwayo intercepts the ball on the edge of the Bafana defence as the Super Eagles look to snatch a late winner.

79' The momentum with South Africa as we enter the final 11 minutes of the game.

75' Play is stopped as Khune is down injured.

71' Tau dribbles past two Nigeria defenders, but Collins intercepts the former's pass as the hosts looked to take the lead for the first time.

69' Nigeria sub: Success IN, Iheanacho OUT.

68' Nigeria are about to introduce Success, who is a striker by trade.

66' Libya recorded a 8-1 win over a hapless Seychelles side.

64' The hosts are looking to utilize Lorch's speed down the right-hand side.

61' South Africa are about to introduce Lorch.

60' It is still 1-1 here in Johannesburg as we reach the hour-mark.

58' Libya have extended their lead as they now leading 7-1 in Seychelles.

54' Ezenwa, who replaced injured shot-stoper Uzoho in Nigeria goal, restarts play from the back as the visitors look to restore their lead.

50' Seychelles have pulled one back against Libya, who are now leading 6-1.

48' Collins' long free-kick goes wide of the target without troubling Khune in the Bafana goal-posts.

46' The second-half is underway.
Midfield maestro Agu, forwards Success and Onyekuru could be introduced by Nigeria coach Gernot Rohr in the second half.


South Africa coach Stuart Baxter is likely to introduce attackers Lorch and Pule, who have been in good form at club level.

45' Bafana are looking to contain the Super Eagles as the half-time break approaches.

39' The momentum is with the Super Eagles as we approach the half-time break.

37' PERMUTATIONS: If it ends 1-1 between SA and Nigeria, then Nigeria will qualify for Afcon and Bafana will have wait until the final day to know their fate, especially because Libya are leading Seychelles.

35' Nigeria keeper Ezenwa pushes away Tau's corner-kick and the visitors try to launch a counter attack, but the ball goes out for a throw in.

33' STAT: Nigeria have now conceded five goals in this qualifying campaign while Bafana have given away a single goal thus far.

31' Play is stopped as Nigeria full-back Collins is down injured.

27' Mothiba scores with a tap in after some brilliant work by Tau, who beat two Super Eagles defenders.

24' Collins finds some space outside the Bafana box and he unleashes a powerful shot which flies over the crossbar.

18' Libya are leading 3-0 at half-time against Seychelles, who have already been eliminated.

17' Mothiba finds Tau with a low pass on the edge of the Super Eagles box, but the latter is ruled offside.

15' Bafana are now doing most of the attacking as they look to level matters.

11' Bafana defender Mkhwanazi deflected Collins' cross into the back of the net to hand the visitors the lead.

7' GOOD SAVE! The Super Eagles combine nicely on the edge of the Bafana box and Musa forces Khune into a good save with a low shot.

3' The visitors are dominating possession thus far as they look to penetrate the Bafana Bafana defence.

1' The match is underway.