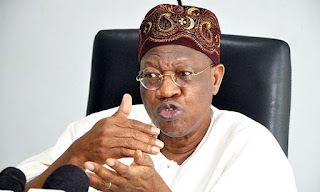 Minister Information and Culture, Lai Mohammed, has said that it costs the Nigerian governments N3.5 million naira a month to feed Ibrahim El-Zakzaky, the leader of the Islamic Movement in Nigeria, IMN, otherwise known as Shiite.

Mr. Mohammed made the statement which has gone viral on social media on Wednesday, following the decision of the Kaduna court which denied the IMN leader bail.

The IMN leader and his wife have been in detention after they were arrested in Zaria, in December 2015. They were first arraigned on May 15, 2018 and charged alleged murder, culpable homicide, unlawful assembly, and disruption of public peace, among others.

They have subsequently been denied bail severally while his followers have continuously been having violent clashes with the security operatives, especially the Nigerian army.


After a bail application was entered again in court yesterday and was denied, the minister of Information had addressed some journalists where he informed them that El-Zakzaky was kept in a safe place.

He however added that it costs the Nigerian government a whopping sum of N3.5 million naira a month to feed the IMN leader who is in detention.

According to the minister, “the issue of whether, where he is, let’s keep it off record. He is in a residence and eating; I mean, it costs the government N3.5 million naira every month to feed him.”

“I asked. We don’t want to inflame passion. Islamic Movement in Nigeria are a different kettle of fish.”

Meanwhile, MR. Mohammed’s statement has sparked outrage on social media with many expressing shock and disbelief at the minister’s claim on the feeding of the Shiite leader.

Some have even said it was not economical for the government to keep holding the IMN leader in detention if such cost is being incurred.