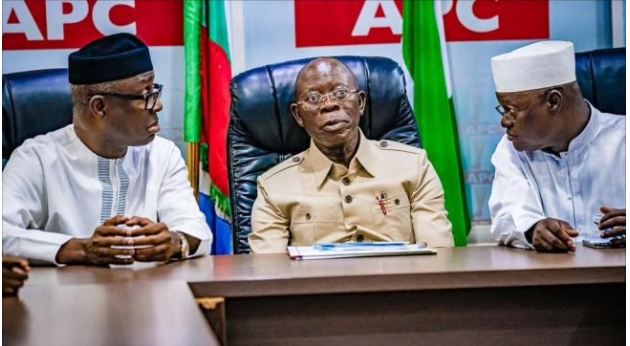 Adams Oshiomhole, national chairman of the All Progressives Congress (APC), says governors can meet the demands of workers.

The organised labour is currently fighting for an upward review of workers pay from N18,000 to N30,000.

While labour is insisting on N30,000, Abdulaziz Yari, chairman of the Nigerian Governors’ Forum, had said apart from Lagos and Rivers, any state which attempts to pay N30,000 would go bankrupt.

He said the only condition for N30,000 minimum wage is if the workforce is reduced.

But Oshiomhole, a former president of the Nigeria Labour Congress (NLC), said as a governor, he told his colleagues that payment of salaries was no burden, but a means of enhancing the development potential of the state.

Oshiomhole, who governed Edo state between 2008 and 2016, said that the country’s major problem is stealing of public resources.

“My views are clear, that payment of wages is not an act of kindness for an employer to pay the employees’ wages at the end of the month. Even the Holy Bible says that the labourer is entitled to his wages”, Oshiomhole said on a television programme, according to The Nation.

“I think, again, this is where President Buhari stands out clearly. He has publicly asked public sector employers; how do you sleep when you have not paid your employers for one year? But he did not stop at lamenting it, he went on to provide the much- talked about bailout fund and said, ‘please use this money to pay your workers and pay pension arrears’..

“As for my views on the minimum wage, I tried to deal with it as a governor. I told my colleagues then that wage is not a burden in the society. In economics, when people work and get paid, purchasing power is enhanced and because purchasing power is enhanced producers will respond to that by seeking to produce more goods and services. And in the process they will recruit more hands.

“I remember some people calling me to ask how you will pay it. I am on record of having paid it and as we speak my successor in office is paying it. I do not agree with those who says Nigeria cannot afford a more realistic minimum wage.

“My being in government or now chairman of a party cannot change what I believe in. I know that no nation has enough to meet the greed of leaders but nations have enough to meet basic needs of their people.

“The real problem in the public sector is money being stolen in the name of salaries; I found it embarrassing when we talk about ghost workers. And I ask the question who counts ghosts, it is only in Nigeria that ghosts are known. The labourer deserves its wage; the primary purpose of government is the welfare of its people. So we must pay wages as at when due.”