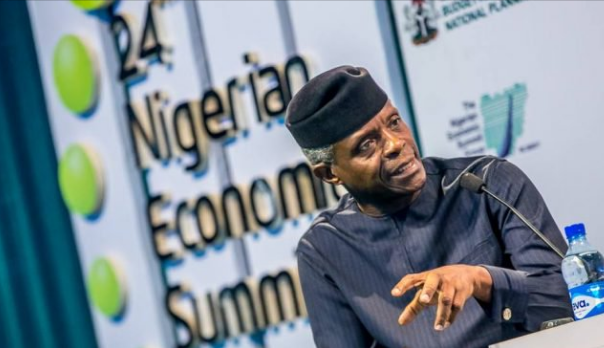 
The report of the House of Representatives Ad-hoc Committee on Emergency and Disaster Preparedness indicting Vice President, Yemi Osinbajo and Engr. Mustapha Maihaja, the Director General of the National Emergency Management Agency (NEMA) is an eloquent proof of the deeply ingrained decadence in the Nigeria’s legislative process where investigations are carried out based on personal premonitions and flagrant animosity.

In its report, the House Committee alleged that the sum of N5.8 billion was illegally approved and released in June 2017 via a memo raised from the Office of the Acting President, directing the Honourable Minister of Finance and the Accountant General of the Federation to so act.

The House Committee also concluded that the payment made was in contravention of approval of the National Assembly. This conclusion suggests a covert attempt to paint the exalted government of integrity of President Muhammadu Buhari and his undiluted erudite Professor of Law, Vice President Yemi Osinbajo. The facts available show that there is a big gulf between the report of House Committee and the reality, suggesting a failed attempt to discredit the efforts of a government that is making frantic efforts towards ameliorating the plights of Nigerians in North East region who were and still are, in dire need of humanitarian interventions.

To uncover the political intrigues and scheme behind the House Committee’s report, there is need put in the right perspectives the circumstances that compelled the Federal Government to give approval to the said amounts at the time. In North East Nigeria, security and humanitarian conditions had deteriorated considerably, due to violent upheavals caused by the Boko Haram insurgency. Fleeing populations and host communities were confronted with acute food shortages resulting from successive poor harvests and abandoned farmlands, minimal cross-border cash crop trade and lost economic opportunities.

More disturbing was the Cadre Harmonisé analysis of August 2016 which placed the figure of food insecure people in Borno, Yobe and Adamawa states to about 4.4 million, out of which 1.1 million people were reported to be severely food insecure in Borno and Yobe States. Furthermore, in April 2017, a warning was given by the United Nations World Food Programme (UN WFP) that it would be reducing its vital support to about 1.8 million Internally Displaced Persons by as much as 85 per cent, due to corresponding reduction in funding by the donor countries.

Around the same time, the United Nations Commission for Refugees in Geneva had also issued a warning of growing risk of mass death from starvation among people living in conflict areas, including Nigeria. All these developments signified that ruthless danger was imminent, as the humanitarian crisis in the North East was hurriedly advancing towards a more catastrophic proportion.

Food security in any country calls for concern, not only of the home government but of the international community. This is more so when the nation faces a grave humanitarian crisis in an entire region. In the North East, international aid agencies and non-governmental organisations were very active in providing food and medical aid, thereby contributing substantially to the humanitarian relief efforts in the region. No responsible government will stay aloof while her citizens progressively move towards being consumed by humanitarian crisis.

In response to these threatening developments, and to further avoid further deterioration of the food supply situation in the North East, the Federal Government of Nigeria (FGN) immediately swung into action by conceiving a strategic food intervention plan, to increase supply to the affected States and, in the process, bring down the general prices of food items. To this end, a meeting on Emergency Food Delivery to the North East was held at the Office of the Vice President on 13 May, 2017 with the following personalities in attendance: The Vice President (then Acting President), Honourable Minister of Finance, Honourable Minister of Budget and National Planning, Honourable Minister of Agriculture and Rural Development, Governor, Central Bank of Nigeria (CBN), Deputy Chief of Staff to the President, Senior Special Assistant to the President (Office of the Chief of Staff), Special Assistant to the President (Planning & Coordination) and the Special Assistant to the CBN Governor. This group later metamorphosed to the Presidential Committee on Food Security and Intervention in the North East.

Based on the information received from the United Nations World Food Programme, the meeting established that a gap of 45,000 Metric Tons of food assistance was imminent and made immediate arrangements to fill the gap. To ensure effective distribution of the grains to displaced persons in the region, the then Acting President Yemi Osinbajo established an Emergency Food Intervention Project Team, consisting of the Director General, of NEMA and representatives of the National Security Adviser (NSA), Chief of Defence Staff (CDS), Chief of Army Staff (COAS), Chief of Naval Staff (CONS), Chief of Air Staff (COAS), Department of State Security (DSS), Nigeria Police and the Presidency. The Committee also worked with respective State Emergency Management Agencies (SEMAs) as well as humanitarian agencies, such as World Food Programme, International Committee of the Red Cross, and the United Nations Office for the Coordination of Humanitarian Affairs. Fortunately, the CBN Grains Reserve Programme, which had already started, provided a good basis for solving the problem. Before this time, the CBN Governor had provided loans to private sector companies to procure, store and maintain grains as part of a price stabilisation programme, and through this, a total of 30,905 Metric Tons of Maize, Soya beans and Sorghum were procured. Since the CBN only provided loans for the grains acquisition, the companies concerned had to be paid before they could be made to release their stock of grains for distribution in the North East. It was also agreed at this meeting that the NEMA and the SEMAs of the North East should be saddled with the responsibility of designing logistics for the distribution of these food items.

After consultations, analysis and submission of necessary documents, the Director General of NEMA submitted a Memorandum to the Acting President on June 2, 2017 with an approval, release and utilisation of the sum of N829 Million.

With all these important figures, curious minds would want to know what the grouse of the House of Representative Committee on Emergency and Disaster Preparedness is. The Committee reported that procurement rules were not adhered to. Does that mean that a House Committee that is made up of lawmakers is not conversant with Section 43 of the Public Procurement Act which makes provision for emergency procurement, in which case the procuring entity is allowed to engage in direct contracting for goods and file a report thereafter with the Bureau of Public Procurement?

The House Committee report also suggests that taxes from these transactions were deliberately waived. It is wrong to assume that taxes and interests accruable to government from these transactions in food items were deliberately ignored or waived by neglect. Of course, we expect that any loans advanced to any of the companies would be recovered with the agreed interests and that any profits made by such companies would be liable to tax in the usual manner. It will, therefore, amount to double taxation.

The House Report also suggests that the grains were never delivered to the target states. This part of the report shows the desperation of the Committee to give dog a bad name in order to hang it. Facts available indicate that those grains were distributed to the beneficiary states. In fact, in order ensure effective distribution of the grains, an Emergency Food Intervention Project Team was established, consisting of the Director General of NEMA and representatives of the National Security Adviser, Chief of Defence Staff, Chief of Army Staff, Chief of Naval Staff, Chief of Air Staff, Department of State Security, Nigeria Police and the Presidency.

In addition, the Federal Government also worked with respective State Emergency Agencies, as well as Local and International Non-Governmental Organisations, including World Food Programme, International Committee of the Red Cross, and the United Nations Office for the Coordination of Humanitarian Affairs, in the distribution of the items to the intended beneficiaries. As a matter of fact, Vice President Yemi Osinbajo was personally present in Maiduguri, Bornu state when the food distribution was flagged off on 8th June, 2017.

Moreover, robust monitoring and evaluation systems were entrenched to ensure transparency and accountability of the entire process.

With all these overwhelming facts and evidences, do you think Vice President Yemi Osinbajo and the Director General of the National Emergency Management Agency, Engr. Mustapha Maihaja deserve to be crucified and vilified? You be the judge!!

Nathan is an Abuja-based media and communications expert