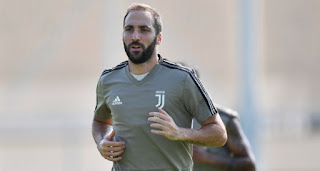 AC Milan striker, Gonzalo Higuain, has stated that he has no plan of leaving San Siro in the coming months amid speculations that Chelsea are preparing a bid for him.

The Argentine international, who signed a season-long loan deal with Milan from Juventus in the summer, has repeatedly been linked with a move to the West London club.

The 30-year-old has scored seven goals in 13 appearances so far for Milan this campaign.

But despite the speculation, Higuain has insisted that his future still remains with the Seria A club.


Speaking about Chelsea’s interest in him, Higuain was quoted by Metro UK as saying: “I’ve read many things.

“I am not angry or upset. I am happy at Milan and the same goes for the club. That’s all that matters.”

Milan will tackle Dudelange in the Europa League fixture on Thursday night.

Higuain added: “We need a win and a good performance to progress in Europa League.

“I want to play and prove that AC Milan didn’t make a mistake in signing me.”