EFCC probes Akwa Ibom over withdrawal of another N6.5b from account

6:55 AM CuteNaija 1 Latest News in Nigeria 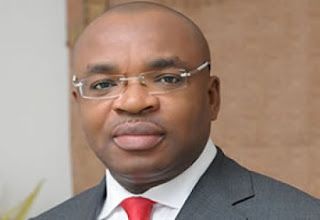 The Economic and Financial Crimes Commission (EFCC) is probing some Akwa Ibom State officials for alleged withdrawal of N6.5billion in cash from an imprest account.

The cash was said to have been diverted from a derivation account to the imprest account of the Ministry of Justice/ Office of the Accountant-General in the state.

But following intelligence report, EFCC discovered that the allocation was gradually withdrawn in cash for “unknown purposes.”

Detectives have started investigating clues that the cash was laundered by some state officials including a commissioner.

About N200million out of the sum has been traced to the account of a commissioner in the state.

Findings revealed that N105million out of the N200million was suspected to be a kick-back from a Senior Advocate of Nigeria (SAN) who was allegedly paid about N530million as “curious legal fees.”

According to a fact-sheet obtained from the anti-graft agency, the N6.5billion was diverted from a derivation account to the imprest account between 2015 and 2017.

“The Bank Unit succeeded in tracking the cash from the Derivation Account/ Allocation to the imprest account of the Ministry of Justice/ Office of the Accountant-General in the state. This investigation is different from the N1.4billion, belonging to the state, which was wired into 11 suspected slush accounts.

“Preliminary investigation confirmed a serious case of money laundering. The N6.5billion was withdrawn in piecemeal in cash to cover up any trail.

“We are already looking into the accounts of some individuals and officials of the state including a commissioner who was suspected to have benefitted about N105million out of about N530million linked with a Senior Advocate of Nigeria (SAN).

“Our detectives have renewed the review of the SAN’s accounts accordingly. Certainly, many links were used to launder the N6.5billion.”

Responding to a question, the source added: “The aide to the commissioner has been detected and he has made useful statement.

“Cash transactions by officials in Akwa Ibom have become rampant. But we will get to the roots of the laundering of this N6.5billion between 2015 and 2017.”

The EFCC had earlier discovered how about N1.4billion belonging to Akwa Ibom State Government was wired into 11 suspected slush accounts.

The cash was remitted into the suspected accounts in two tranches of N1.1billion and N300million.

Some of the accounts belong to eight top lawyers in the country who are under surveillance.

One of the affected lawyers has made statement to the EFCC on how he came about huge transfers into his account from Akwa Ibom State Government accounts.

The source told detectives that the “curious deposits” were legal fees for 16 cases but without records of any agreement between his team and the state government.

But instead of paying the legal fees through cheques, the N1.4billion was hauled into the 11 accounts in cash.

The EFCC however discovered that one of the accounts was opened on March 16, 2016 and the narration of the deposit showed that it received huge sum on March 14, 2016.

The fact-sheet said: “There was no document tied to specific payment. The deposit also did not specify what the cash was meant for.

“There was no evidence of any agreement between the state government and the beneficiaries of the N1.4billion. The lead coordinator of the lawyers who benefitted from the cash could not say how much was charged and how much was agreed upon.

“The lead lawyer only said the cash was for 16 cases in various courts across the country but only a case was reflected as having gone from the lower court to the Supreme Court.

“The lead lawyer has made statement without any shred of evidence or document to justify the legal contract.”