Court orders Dasuki’s trial to proceed in his absence 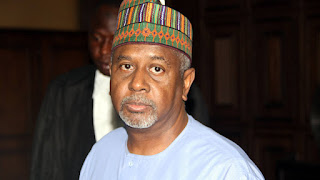 The Federal High Court in Abuja on Monday ordered that the trial of detained former National Security Adviser, Col. Sambo Dasuki, on charges of money laundering and illegal possession of firearms would henceforth proceed in his absence.

Justice Ahmed Mohammed, in making the order, invoked the provision of section 352(4) of the Administration of Criminal Justice Act 2015, which allows the trial of a defendant to proceed in his or her absence if there is no reasonable explanation for the absence of the defendant.

The judge fixed December 11 for continuation of trial with or without Dasuki’s presence in court.

He noted that the ex-NSA, who would have spent three years in the detention of the Department of State Service by December 30, 2018, had written a letter dated November 12, 2018, to the court intimating the court of his unwillingness to appear in court for his trial.


Justice Mohammed added that the letter by the ex-NSA coupled with his absence from court on November 13, the day after he wrote the letter, and on Monday, showed that he was no longer interested in appearing in court for trial.

The judge ruled, “It is very clear that the defendant is not willing to be attending court for his trial.

“I hereby invoke the provision of section 352(4) of the Administration of Criminal Justice Act by ordering the trial proceed in his absence.”

Earlier, moving the application for the invocation of section 354(2) of ACJA, the prosecuting counsel, Mr. Dipo Okpeseyi (SAN), informed the court that the prosecution had complied with the earlier order of the court directing the prosecution to file an affidavit stating that the ex-NSA had refused to attend court.

He noted that the ex-NSA had refused to attend four court sessions since January 2018.

Okpeseyi said, “He has been absent for four times. To compound the effrontery, he wrote to this court.

“That is a direct challenge to the authority of this court.

“We urge this court not to take the challenge lightly.”