Buhari, Critics And Next Level 2019 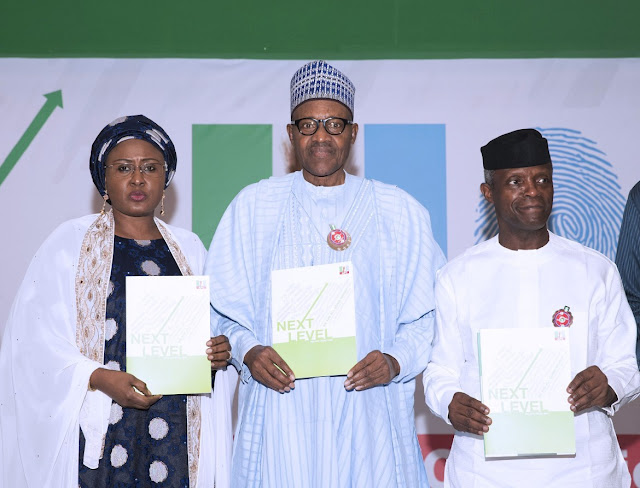 One of the attributes of great leaders is the mastery of the art of pro – activeness, especially at very critical moments of nationhood.

Unfortunately, this art is almost alien to most of our leaders as they are caught napping at times when they are expected to rise to the occasion, leading to a yawning gap between African countries and the developed world in terms of growth and technological advancement.

This no doubt has been the bane of most  African countries, including Nigeria, leaving unpalatable consequences which impeded and continues to impede our growth and development.

It was therefore a thing of joy when President Muhammadu Buhari, not wanting to be bitten by this terrible bug launched ‘Next Level, 2019’, a compilation of his achievements and plans for a second term.


One of the most striking features of the event was that it took place almost as soon as the curtain on political activities for 2019 was raised which is very instructive.

This no doubt is remarkable as it is a demonstration on the part of the president that he is truly serious about leading the nation again to consolidate on the achievements of the last few years.

Given the fact that a lot of efforts must have gone into the project, it also underscores that he is not taking Nigerians for granted and a demonstration of the fact that he clearly identifies with their hopes and aspirations.

This is a clear departure from what we used to see in the recent past when aspirants at various levels approach us to vote for them without any level of seriousness.

Curiously, these are people who we entrust our destiny into their hands as they are naturally saddled with steering the ship of state. It is therefore safe to say that our decisions and indecisions in the recent past is largely connected to the unfortunate rape of our commonwealth by these leaders.

This is the major reason why the launch of ‘Next Level 2019’ by President Buhari needs to be applauded by all men and women of goodwill who truly love the growth and advancement of our nation, especially at this critical moment.

Aside from providing an insight into the journey of the present administration so far, ‘Next Level 2019’ gives detailed information about the administration’s plans for the future.

The document therefore presents Nigerians and all lovers of Nigeria, ample opportunity to score the Buhari administration based on its promises especially the landmarks recorded in the fight against corruption, agric revolution, diversification of the economy, infrastructural development, economic emancipation for the poorest of the poor, fight against Boko Haram and more.

This no doubt is very crucial as it lets the reader into the much – needed details that could be used in assessing the performance of the Buhari administration in all critical sectors as opposed to speculation or hearsay.

Aside this, the document is a veritable research material which is bound to be useful to voters, students, academics researchers, etc who may need critical information about the government.

This is unsurprising as the Buhari administration has never hidden its desire to run a transparently open system for the benefit of Nigerians both at home and in the diaspora.

Though some members of the opposition have criticised the document, the good thing about it is that they have not been able to rubbish the facts presented.

Worse still, it is doubtful whether anyone remembers the title of the document launched by the Peoples Democratic Party (PDP) candidate, Alhaji Atiku Abubakar same day President Buhari launched ‘Next Level 2019’.

This no doubt speaks volume especially when one considers the voodoo economics of Atiku which many have so far dismissed as unworkable and an attempt to hoodwink Nigerians to vote for him in his desperate bid to rule Nigerian in 2019.

The question really is: can the achievements of Buhari over three  and a half years in critical sectors of our economy – agriculture, solid minerals, power, infrastructure, health, anti – corruption etc be waved aside by discerning Nigerians?

For the first time in our nation, the country has made more money than it has made from non – oil exports since independence.

From agriculture, to solid minerals, the profile of the Buhari administration keeps rising by the day and winning global applause.

This is not forgetting the giant strides made in power, job creation, road construction and more for which Nigerian remain grateful.

Consequently, ‘Next Level 2019’ is most expedient at this time as it is a story of what the Buhari administration hopes to achieve in the next four years as part of strategies aimed at putting Nigeria back on stream to make her regain our lost position in the comity of nations. Can anyone say he does not desire railways working across the nation as being carried out by the Buhari administration, especially since this government kick started this project some years back?

Would anyone kick against the on – going efforts to make our airports world-class as demonstrated with the Port Harcourt Airport, and the successful construction of the Nnamdi Azikiwe International Airport, Abuja second runway by this administration?

Does anyone hate the on – going social intervention projects aimed at breaking the artificial wall between the rich and the poor through Trader moni and other empowerment schemes to lift the poor out of poverty as demonstrated by the Buhari administration?

Even the South – East where President Buhari’s administration recorded the least votes has about 70 on – going projects across the zone, with more to come.

This is what the ‘Next Level 2019’  is all about as it all about the Nigeria of our dreams.

Now is the time for all hands to be on deck by supporting PMB for a deserved second term in office.

–Umohinyang, a social commentator wrote in from Lagos