Buhari and the rule of law by Sharon F. Cham 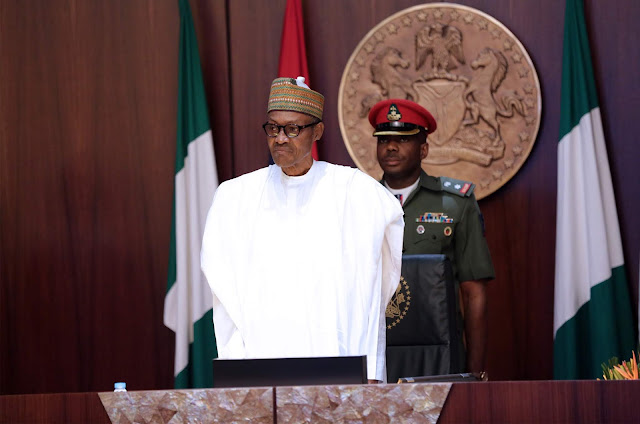 Just over a month ago, the United States of America categorically said it will not cooperate with the International Criminal Court of Justice (ICC) in any way or any form, and neither will it allow the court to try any American citizen or that of any of its allies. The US national security adviser, Ambassador John Bolton specifically called the ICC an “illegitimate court” besides threatening the entire judges of the court with sanctions if they dared entertain anything or any matter the US considers a threat to their national interests.

Here in Nigeria, there was a recent uproar by some so- called rule of law advocates after President Buhari rightly said that national interest supersedes the rule of law which some people use as a convenient cover to seek freedom or protection for persons accused of committing heinous crimes and even rising against the sovereignty of the Nigerian state like Sambo Dasuki, Nnamdi Kanu and others like them! To such people, rule of law reigns when every rogue of their liking is walking about freely without accountability, even if the person has committed a heinous crime.

I thought I will see or hear deafening outrage from these rule of law “activists” after the US pronouncement on the ICC but, alas, till now there’s dead silence from them! The US is known as the greatest champion and advocate of democracy and the rule of law, both domestically and internationally, but to hear them rile against an internationally legitimate organ like the ICC that was created and established for the sole purpose of strengthening democracy and the rule of law globally? Well, that was a shocker!

Since 2001, or thereabout, the United States has kept some suspected terrorists in detention at Guantanamo bay without trial. That’s about 17 years now without trial!

Here in Nigeria, the so-called rule of law advocates are calling President Buhari a dictator for detaining somebody like Sambo Dasuki for just three years without as much as caring for the thousands of people that have been killed and millions that have been made IDPs because of “Boko Haram”, which, apparently, were deliberately allowed to grow and fester for they equally label the president a dictator for decisively crushing a terror group called IPOB with their leader, Nnamdi Kanu running away at the mere sight of a python!

With the exception of a handful number of objective, patriotic critics who really care about the practical application of the rule of law in Nigeria and the world generally, most of those who lifted their voices in hypocritical lamentations and attacks over the president’s stance on the matter are those who, one, just hate the president for who he is, where he came from and what he stands for, and two, hate him for overturning their applecart of looting and sharing bazaar of public funds. For these two groups, anything President Buhari says or does or initiates or accomplishes, must be attacked, criticised, condemned and made to look worthless even if it is the free feeding of primary school pupils, or the seizure of territory from the hands of “Boko Haram”, or the N-Power programme, or the TraderMonie policy which is now boosting the macroeconomic health of the nation, or the construction of several roads across the country, or the revival of our neglected rail lines, or the massive improvement of electricity generation and supply, or the several payments of bailouts to states to clear backlogs of salaries and enhance their local economies, or the steady boost in agriculture to diversify the economy and so on. Their rabid hatred of the president for no justifiable reason is just in tandem with an African proverb that says, even if you dance on water, your enemies will accuse you of raising dust!

To such people, Nigeria should have been on the same pedestal of growth and development like Malaysia or India or Singapore or even China. And they cheered when the President of Malaysia, Mahathir Mohammed recently placed over 3,000 former and current government officials under travel ban in order to retrieve stolen public funds from them. But here in Nigeria, they lie, huff and puff and shout hoarse that democracy is under threat when it emerged that President Buhari has placed a mere 50 suspected high profile thieves under travel ban, and you’re left wondering why a travel ban on suspected criminals in Malaysia or Singapore and even in the United States is not a threat to democracy but it is in Nigeria. In whose interest should thieves be allowed to travel freely to launder their ill-gotten wealth while the very country they stole from is stagnated? If Malaysia, Singapore, South Korea and even the United States of America allow such unfettered freedom for thieves and other top shot criminals in the name of a so-called rule of law, wouldn’t they have remained backwater states like Nigeria was forced to remain from 1999 to 2015?

The world is replete with countless examples of drastic steps or actions certain nations and their leaders have had to take in the promotion and sustenance of their national interests. There is no person in any sovereign nation that is better informed than the government of the nation, and that’s because of the availability of security and Intelligence agencies who feed it with various Intelligence information on various plots by locals or foreigners against the well-being of the sovereign state. If the government acts on such credible information, and arrests the plotters, and yet some lawyers, out of mischief or out of ignorance, explore and exploit the weaknesses of our laws to have such dangerous persons released, what do you expect the government to do when the nation’s security is under such severe threat?

Be mindful of the fact and truth that if such dangerous persons are walking free, and they perpetrate their evil plots against the public or against public institutions, it is the very same people making untenable noises about the so-called supremacy of the rule of law over national interests that will begin to attack the same government again for “failing to protect citizens” yet they are the ones hiding behind the rule of law to have notorious persons moving about freely! With such persons you can never win, and the best thing for any reasonable and responsible government to do is to simply listen to them but do what is right in the nation’s interest.

On this matter and in this context, if the United States is right in elevating its national interest over international rule of law, then President Muhammadu Buhari is very right.