Anthony Joshua has to stop chasing the money - Lennox Lewis 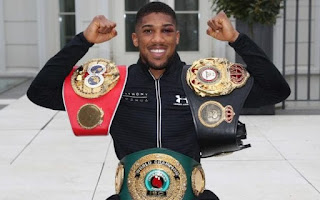 Fury takes on Deontay Wilder next month in a bid to become a world champion again, but boxing fans are desperate to see the Brit step into the ring with Joshua in 2019.

Joshua and Eddie Hearn have already ruled out fighting Fury in April at Wembley, while negotiations with WBC champion Wilder broke down last summer.

It remains unclear when Joshua could fight either heavyweight, with Dillian Whyte and Oleksandr Usyk AJ’s most probable opponents in the next 12 months.


Lewis, a three-time heavyweight champion, warned Joshua focusing on his bank account will wreck his legacy.

‘Joshua can take his time. He’s champion now. He says he doesn’t want to fight Tyson Fury for a year or so,’ he told Boxing Scene.

‘He wants to go around making money. I think that’s going to be a downfall for him. He has to stay with it, he can’t be in the background.

‘If he wants to be champion, he has to act like a champion.’

Fury and Frank Warren has insisted they want a shot at Joshua in April should the heavyweight beat Wilder.