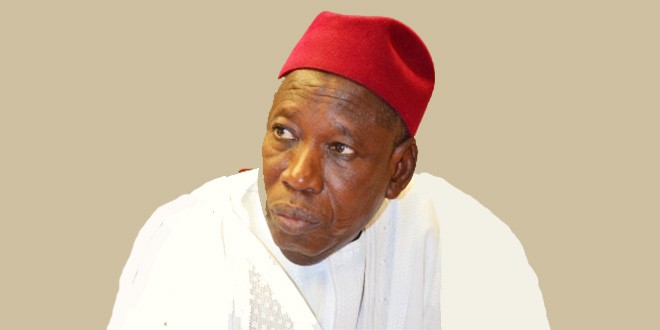 The Governor of Kano State, Abdullahi Ganduje, on Friday failed to appear before the state House of Assembly panel probing the $5m bribery allegation levelled against him.

Instead, the state Commissioner for Information, Youth and Culture, Mallam Mohammed Garba, represented him on the occasion, during which he tendered and read a written statement before the seven-man panel.

But the state Attorney General, Ibrahim Mukhtar, clarified that the invitation to the governor gave him three options: to come alone; send a proxy; or come along with his lawyer.

The Chairman of the investigative committee, Baffa Dan-Agundi, later mandated Garba to read the statement before the committee members.


The commissioner told the panel members that Jafar Jafar, the journalist who published the videos showing Ganduje collecting bribes, was a serial blackmailer.

Garba recalled Jafar had sometime ago accused a former governor of the state, Mallam Ibrahim Shekarau, of owning houses in London and Dubai, just as he also accused the Emir of Kano, Mallam Muhammad Sanusi 11, of lacking moral standards.

The information commissioner said all the bribery allegations reported by Jafar were false, as Ganduje “did not, will not and has not collected any bribe from anybody.”

In his response, the panel chairman, Dan-Agundi, after reviewing proceedings of its second hearing, said the panel would study the nine video clips tendered by Jafar.

He therefore adjourned further sitting of the panel to Tuesday, pointing out that the venue would not be made known to members of the public but only to stakeholders and committee members for further deliberations.