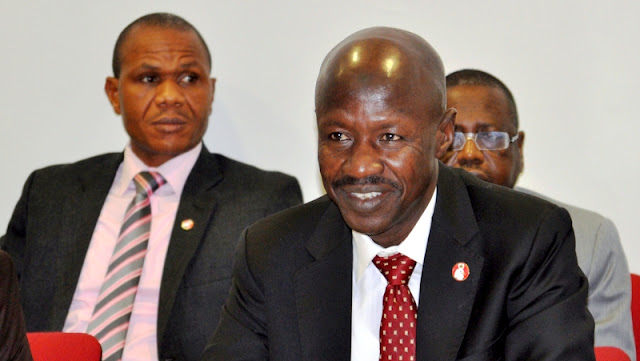 Donors to political parties were put on notice yesterday that the law will keep an eye on them.

Economic and Financial Crimes Commission (EFCC) Acting Chairman Ibrahim Magu said the agency would monitor donations to political parties during next year’s polls and the identities of the donors.

He warned political office holders against diverting public funds to their campaigns and for elections.

Magu said the $2.2 billion arms scandal under the administration of ex-President Goodluck Jonathan caused a setback for the fight against insurgency.

The EFCC chief was delivering a paper at a one-day retreat for the 36 governors and key election stakeholders in Abuja.


The retreat, with the theme: “Institutionalizing Transparency, Accountability, and anti-corruption issues in the electoral process in Nigeria”, was organised by Centre for Values In Leadership (CVL).

Magu, who spoke through Olanipekun Olukoyede, his Chief of Staff, said parties should know that they will account for campaign funds after the poll.

Admitting that the enormous task before the EFCC and cannot do it alone.

On the $2.2 billion arms scandal, Magu said the cash was allegedly diverted to election funding.

He said: “When you consider the fact that the money was disbursed for the purpose of procurement of arms to fight insurgency in the North, then the negative impact of funding elections with stolen government funds becomes real at once”.

”The 13-man Committee, which I was a member of, analysed how funds were transferred to the office of the National Security Adviser (NSA) and the Nigerian Armed Forces in local and foreign currencies and subsequently disbursed.

“Any time money is diverted by an administration to fund a political campaign, it is money already budgeted for an essential need which will never be met because of heartless and corrupt public officials.

“The money being misappropriated is either from health, security, education, road construction, personnel costs etc. The case of arms procurement by the NSA under President Goodluck Jonathan government is apposite.”