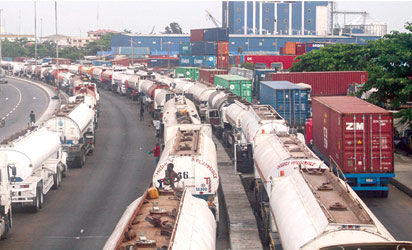 Many exhibitors at the just-concluded 2018 Lagos International Trade Fair have lamented their inability to evacuate their goods from the seaports in time to sell at the fair, due to the delays in clearing processes coupled with the lingering gridlock along Apapa Port access road.

One of them, Mr Chris Igbokwe, told Maritime First, an online maritime news portal, that some of the generators and pumping machines he had planned to exhibit at the fair did not arrive Lagos before the end of the 10-day fair.

“The goods were sent since September. It takes about four to five weeks to get to Nigeria and you give yourself about 10 days to receive them. But as I speak to you, the goods are not out of the port,” he said.

The Chief Executive Officer, Midas Touch, Mrs Sarah Joseph, said she had targeted the trade fair to unveil some hair extensions she ordered from India, but the goods were still inside the port on the last day of the trade event.

The Vice-President, Association of Nigerian Licensed Customs Agents, Mr Kayode Farinto, blamed the situation on the lack of critical equipment at the port.

He noted that the absence of functional scanners had slowed down efficiency and also compromised revenue accruable to the government.

Farinto stated that the scanners had not worked for more than 10 years now, making cargo delivery to drop by more than 50 per cent over the period.

The President of the National Council of Managing Directors of Licensed Customs Agents, Mr Lucky Amiwero, said that the entire problem was caused by the concession of the port by the Federal Government in 1996.