Why did el-Rufai travel out of Kaduna in the heat of this crisis? -Senators 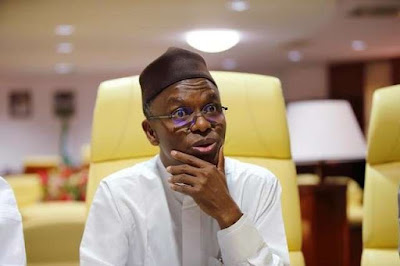 Two senators have accused Nasir El-Rufai, governor of Kaduna, for being complicit in the violence that engulfed parts of the state.

Over 50 people have been killed in the ongoing religious conflict in Kaduna.

Despite a curfew that was imposed on the state, three people were killed on Monday.

At plenary on Wednesday, Suleiman Hunkuyi, senator representing Kaduna north, brought the violence in the state to the attention of his colleagues.

Laah said the people who have been killed across the country did not deserve to die because “life is given by God and no one is supposed to taken by a human being”.

“In the first place, I noticed that the governor is out of town,” he said.

“He is not putting all the necessary measures in place. The responsibility he leaves them all. It is not compulsory to vote somebody I can vote somebody if I want and he is not working, he should leave there.

“We are observing and always watching why is he still asking the federal government to give him money? Is he the only governor who has damages? He is looking for the money that he would be giving out. If you don’t have time for the human begins. We cannot allow that to remain.

“This crisis at any given time can happen to anybody. We are fighting this course today to prevent the unforeseen.”

On his part, Gyunka said the governor may have perceived the looming violence and that was why he travelled out of the state.

“This is a calculated attempt, probably he perceived something and that is why he travelled and he quickly ran out. These are issues we need to ask and Nigerians need to know.”

Shehu Sani, senator representing Kaduna central, said there is need for community and religious leaders to seek solution to the violence.

“We are deeply concerned. There is a need for community and religious leaders to come together and discuss solutions,” he said.

Thereafter, the senate urged the security agencies to probe the cause of the violence.

The senators also asked the federal government to ensure the release of Maiwada Galadima, a traditional ruler in the state, who is being held hostage.