We are taking steps to secure Fayose’s release – Lawyer 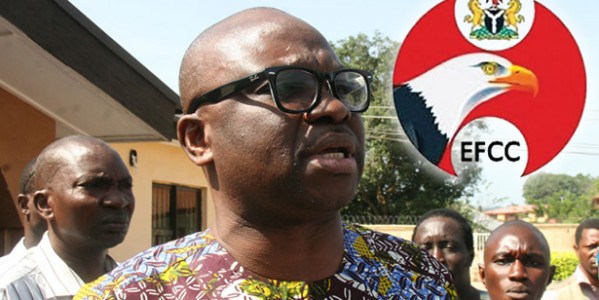 Ozekhome said this in an interview with the News Agency of Nigeria in Abuja on Thursday.

Fayose, whose tenure as governor ended on Monday, had on Tuesday reported at the EFCC office in Abuja to answer to some allegations levelled against him while in office as governor.

Ozekhome said “Fayose’s lawyers are already taking steps to enforce his fundamental human rights by getting him released.


“Yes, his lawyers will go to court to enforce his fundamental human rights.

“The EFCC has no right to keep him for over 24 hours.

“If they have done that by obtaining a Magistrate Court’s Order that will be in the form of “holding charge” which has been declared unconstitutional and illegal by the Supreme Court.

“Holding charge is illegal. It is unconstitutional.’’

Ozekhome said that the section of the Administration of Criminal Justice Act (ACJA) permitting a magistrate to detain a suspect for 14 days was illegal.

According to him, any action outside the provisions of Section 35 of the Constitution which specifically provides for 24 hours, is illegal and unconstitutional.

He explained that the ACJA allowed for detention of a suspect for 14 days, but that Section 35 of the Constitution made it clear that a person could only be detained for 24 hours.

“If they have gotten an order for two weeks from the magistrate court, it is unconstitutional,” Ozekhome stressed.