Senate to constitute technical committee on bills not assented to 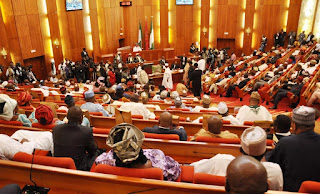 The Senate is to set up a technical committee to study some bills that President Muhammadu Buhari declined assent to.

This followed a Point of Order raised by the Leader of the Senate, Ahmad Lawan, at plenary on Tuesday.

While making reference to Order 43, Lawan said it was expedient for the Upper Chamber to set up a committee to take a look at the concerns raised by the President.

Lawan in his point of order, said, “I have listened to the bills you have read conveying the observations of Mr President for not signing so many bills.

“I believe that we will have something to learn from it to avoid a repeat.

“This is because we put in a lot of time and our very limited resources. If at the end of the day, we are not able to get these things properly done it amounts to waste of time and resources.

“We need to take proactive action. In view of this, I suggest we set up a technical committee under the Chairman, Rules and Business.”

In his remarks, the President of the Senate, Dr Bukola Saraki, asked Lawan to constitute the committee and forward the names of members to senate in plenary.