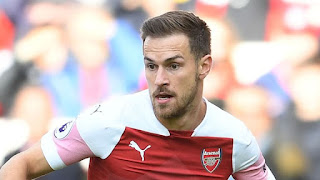 Arsenal midfielder, Aaron Ramsey has said that he will not push for a move away from Emirates during the transfer window in January, disclosing that he is bent on seeing the end of his contract which expires at the end of the season at the club.

Ramsey is set to leave the Emirates after a decade of service in north London. The 27-year-old had been close to agreeing on a new deal but Arsenal recently withdrew their offer amid input from head coach Unai Emery.

The Welshman’s impending exit has drawn interest from other clubs, particularly among Serie A’s elite sides, while Arsenal’s Premier League rivals, Manchester United, Chelsea and Liverpool are all believed to be monitoring his situation.

However, Ramsey has now announced that he intends to stay with the club until the end of the season.


“Will I stay for the rest of the season? Of course, yeah,” Metro UK quoted him as saying.

“I am contracted to Arsenal and I am going to do my best now this season to try and achieve something special.

“Everything has been going great with the club. We thought we were in a position where we had agreed a deal but that’s no longer the case.

“So I just have to carry on playing my football and do my best for Arsenal this season and I’ll leave the rest with the club now.

“That’s a decision that they have made and things happen in football and you just have to get on with it and carry on playing the best I can.

“That’s all I am concentrating on, giving my best for Arsenal.”