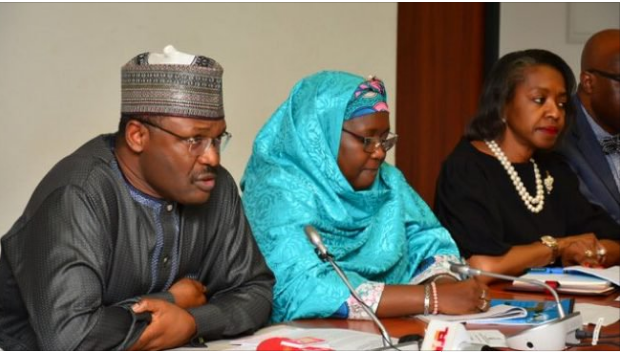 The Peoples Democratic Party (PDP) has asked Mahmood Yakubu, chairman of the Independent National Electoral Commission (INEC), not to bow to “pressure by the presidency” and return Amina Zakari to her former position.

Zakari was head of electoral operations and logistics before being redeployed to the department of health and welfare last week.

The redeployment occurred after the opposition party accused her of working for President Muhammadu Buhari and demanded that she should be removed.

It is unclear if the PDP protest led to the redeployment.

In a statement on Monday, Kola Ologbondiyan, spokesman of the PDP, said there is an alleged plan by the presidency to return Zakari to her former position so she could “manipulate the electoral processes and rig the election for President Buhari”.

“The PDP charges the chairman of the Independent National Electoral Commission (INEC), Prof. Yakubu Mahmood, not to succumb to pressure by the presidency, to return Mrs. Amina Zakari as director of operations,” the statement read.

“The PDP cautioned that Nigerians are already aware of the pressure from the Buhari presidency to return Amina Zakari, a blood relation of President Muhammadu Buhari, as director operation, so that they can use her to manipulate the electoral processes and rig the election for President Buhari.

“While the PDP notes the redeployment of Amina Zakari to another directorate, the party nevertheless, reaffirms its position that her continuous stay in the commission constitutes a threat to free, fair and credible 2019 general elections, given her relationship with President Buhari, who is a major contender in the election.

“Amina Zakari’s removal as director of operations has been hailed by majority of Nigerians, a fact, which shows that voters had already lost confidence in her integrity to hold such a sensitive position, for which they prefer her outright removal from the commission.”

Ologbondiyan also cautioned INEC not to change the rules for the All Progressives Congress (APC) in Zamfara where the commission has said could not field candidates for the 2019 polls.

“The PDP also charges INEC not to change its statute-backed stand on the exclusion of Zamfara state chapter of the All Progressives Congress (APC) from presenting candidates in the 2019 general elections following its failure to conduct congresses,” he said.

“Furthermore, Nigerians are also already abreast of the provisions of the law leading to the exclusion of Zamfara state APC chapter from presenting candidates for the elections and we caution INEC against any contemplations to change the rules for the APC.

“The case of Amina Zakari and that of Zamfara APC constitute another direct integrity test for Prof. Yakubu on his capacity, integrity and readiness for free, fair and credible general elections in 2019.”

Ologbondiyan urged the INEC chairman to be on the side of the people and weed out compromised officials from the commission.