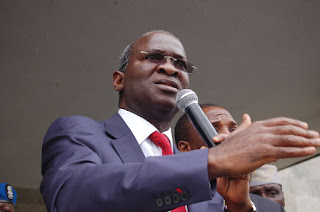 The Ohanaeze Ndigbo Youths wing has urged the National Working Committee, NWC, of the All Progressives Congress, APC,  to clarify its position of the statement credited to Works and Housing Minister, Babatunde Fashola that APC would shift Presidency to the South West in 2023 if Buhari wins.

The group said, “we won’t want to believe that the rumoured pact between President Muhammadu Buhari, PMB,  and Tinubu concerning 2023 is true.”

A  statement signed by the group’s Acting National President, Dr. Kingsley Dozie and National Publicity Secretary, Chief  Osmond Nkeoma said: “We are making it categorically clear that Ndigbo are more united now than ever and no such evil pact can deprive us of our constitutional right to the presidency of the Federal Republic of Nigeria. God will vindicate Ndigbo.

“Such provoking and inciting statements prove our suspicions that the PMB-led APC cannot be trusted.

“We stand in total support of the Afenifere spokesman, Mr. Yinka Odumakin when he said: ‘both the Buhari advocates in the South West and South east are not in tune with the mood of both zones.

“The mood of both zones is not Nigerian presidency in 2023 but restructuring in 2019, because if we restructure the country in 2019 and people have the autonomy to run their regions as they want within corporate Nigeria, Igbo 2023 Presidency will take care of itself.”

“So, we advice Fashola to please concentrate on the task of providing stable power supply, good roads and quality housing to Nigerians rather than making unguarded and inviting statements.”