Most corrupt people ‘re found in govt – Falana 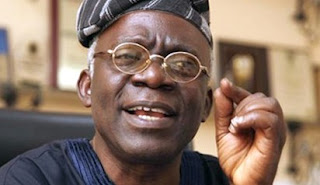 Human Rights activist and legal luminary, Femi Falana, SAN, has urged Nigerian labour unions to cease the fight against corruption from the government, alleging that the most corrupt people are found in government.

He has also called for a full probe of the alleged $500 million bribe involving a serving governor from the North, saying that the matter must not be swept under the carpet.

Falana who stated this in his lecture at the 40th anniversary of the Petroleum and Natural Gas Senior Staff Association of Nigeria, PENGASSAN, in Abuja, with the theme “Dynamic Labour Leadership: Filling in the Economy”, stated that the Federal Government has no business to be borrowing money.

He said that Nigeria has become a joking stock in the international community borrowing money from countries when it could make 100 billion dollars if it could check Britain and the United States where the nation’s oil was discharged.


According to him, "We must go to the root of criminality on International level to recover our money. PENGASSAN should not leave the fight against corruption to government. No government in the world fight corruption genuinely. The most corrupt people are found in the government.

He said, “It is important for the Nigeria Labour Congress, the Trade Union Congress, NUPENG and PENGASSAN to lead other Nigerians to ensure that we wage war against corruption that is impartial, fair and just.”