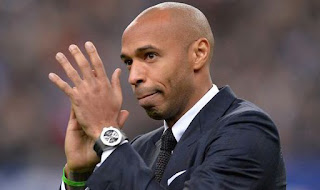 The 41-year-old French World Cup winner, who had been working as an assistant coach for the Belgian national team since 2016, signed a contract with Monaco until June 2021.

The former striker will be joined by Joao Carlos Valado Tralhao, under-23 coach at Benfica, and Patrick Kwame Ampadu, coach at the Arsenal Academy.

Henry replaces Leonardo Jardim, who was sacked in midweek following a string of poor results that left Monaco languishing in 18th in France’s Ligue 1.


Henry knows Monaco well having graduated from their youth system and making his professional debut for the Principality club in 1994.

He notably scored seven goals in the 1997-8 Champions League as the Monaco team of the time, then coached by Arsene Wenger, reached the semi-finals, where they lost to Juventus.

“First of all, I thank AS Monaco for giving me the opportunity to coach the team of this club which is so special to me,” Henry said.

“I am very happy to come back to AS Monaco and extremely determined to meet the challenges ahead. I can not wait to meet the players to start working together.”

After spending five seasons as a player with Monaco, Henry went on to play for Juventus, Arsenal, Barcelona and the New York Red Bulls.

Monaco chief executive officer Vadim Vasilyev, said Henry could “count on our trust and all our support to bring a new dynamic to the team and carry out the mission”.

“His knowledge of football, his passion for the game, his high standards and his commitment to our colours make his nomination a reality.

“Thierry is both aware of the task ahead and eager to start his new job.”