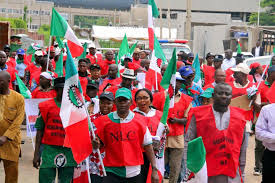 Negotiations byTripartite Committee on a new National Minimum Wage have run into a stalemate, following the Federal Government’s stance that it cannot afford more than N25,000 per month.

But Labour and Organised Private Sector, OPS, have agreed on a N30,000 minimum wage per month.

This is even as President of Nigeria Labour Congress, NLC, Ayuba Wabba, told newsmen in Abuja, yesterday, that the Tripartite Committee had completed its assignment for onward submission to President Muhammadu Buhari.

However, it was gathered that when the tripartite committee resumed sitting last Thursday, the Federal Government shocked other social partners with its presentation of N21,700.

Recall that it was the Federal Government’s failure to present its figure at previous meetings and subsequent adjournment without a resumption date that a nationwide industrial action by Labour was staged between September 27 and 28, before it was suspended on Sunday, September 30.


The suspension was sequel to government’s reconvening of the committee for  Thursday, October 4 and Friday October 5, respectively.

However, disappointed with the Federal Government’s figure and sensing unwillingness on the part of government to increase the wages of workers  in the midst of crushing economic hardship, organised Labour and OPS reached an accord, increasing earlier figure of N25,000 to N40,000.

Speaking after the NLC picketed two private firms in Abuja, Wabba said the committee used two days to reconvene and deliberate on a new minimum wage figure that was acceptable to all employers of labour in the country.

He said: “I want to assure workers that all had been concluded and will be passed for signing within the week.

‘’I also want to appreciate Organised Private Sector, Manufacturers Association of Nigeria and Nigeria Employers Consultative Association, NECA, for their resolve to pay the new minimum wage when it is signed into law.”

The NLC president, however, refused to disclose the figure arrived at by the Tripartite Committee on the new National Minimum Wage.

Wabba said the Presidency would make it public after deliberation by the National Economic Council.

Recall that the Federal Government, under Shehu Shagari’s administration introduced a minimum wage of N125 per month in 1981; in 1989, General Ibrahim Babangida’s government increased it to N250.

Similarly, the General Abdulsalami Abubakar’s administration increased the minimum wage to N3,000 in 1999, while President Olusegun Obasanjo’s government raised it to N5,500 for states and N7,500 for federal workers and those of oil producing states in 2000

In a similar vein, the government of President Goodluck Jonathan increased the minimum wage to N18,000 in 2010/2011.