As It Happened: Nigeria 4-0 Libya 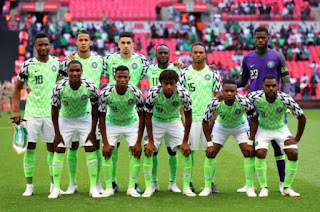 Good afternoon and welcome to Nigerianeye's live update for the 2019 AFCON qualifying game between the Super Eagles of Nigeria and Libya in Uyo.
Please refresh to get new updates.


Nigeria's last game in the 2019 AFCON qualifier was a win over Seychelles, while Libya forced hosts South Africa to a draw in their own match.
Super Eagles captain John Obi Mikel will be missing this match, and news also came out last night that defensive midfielder Ogenyi Onazi will also not be playing because of injury.
Libya on the other hand are unperturbed with injury, but they will only missed their ex coach Adel Amrouche who resigned four days to this game.
Nigeria and Libya have met three times in all competitions with Super Eagles winning two games and lost once against their opponents.
OFFICIAL LINE-UPS


Nigeria go second in Group E ahead of their return leg in Sfax, Tunisia. That was a routine win and possibly the easiest evenings work for Francis Uzoho in goal. Odion Ighalo’s treble did the damage with Samuel Kalu getting his first Nigeria goal.
Thanks for joining our live commentary of the match!

90' Three minutes of stoppage time given in Uyo. This has been a routine win for Nigeria but it is certainly a game to forget for the neutrals and Libyan fans.

88' Gooooal! Nigeria continue to ease their way to victory with Samuel Kalu finding the back of the net. He gets the ball outside the Libyans' 18-yard box from Henry Onyekuru before curling a ferocious shot past Mohamed Abdaula. What a match!

85' William Troost-Ekong's fouls hands him a yellow card and a free-kick to the Libyans. Ahmed Ben Ali's freekick stopped by Nigeria's wall and ball is well cleared out to safety

82' CHANCE: Onyekuru will have himself to blame after failing to put the ball past the goalkeeper after been feed with the ball courtesy Alex Iwobi

76' Ighalo has got a splendid evening and Isaac Success will now be given the task of leading the line.

71' Before Odion Ighalo’s feat against Libya, Nnamdi Oduamadi was the last player to score a hat-trick for the Super Eagles. That was in Nigeria's 6-1 pummelling of Tahiti in the Confederations Cup on June 17, 2013

68' Goooal!!! Odion Ighalo completes his hat-trick. He fires into the net after Ahmed Eltarbi goofed Ahmed Musa's cross. Solid display from the China based man

62' Odion Ighalo has now scored three goals in his last three games for the Super Eagles. Ismael Sharadi out, Rabia Alshadi in for Libya

59' Samuel Kalu outshines three defenders after collecting a pass from impressive Iwobi. The Bordeaux man with only the goalkeeper to beat could not give Nigeria a three-goal advantage

56' Goooal!!! Some good work from Ben Ali sees Nigeria panic slightly at the back but he soon loses possession and Alex Iwobi feeds Odion Ighalo who slots past goalkeeper goalkeeper Abdaula. Super Eagles in cruise control

53' Sabbou covers at the back to stop a run from Alex Iwobi, but he concedes a throw-in in the process with a loose backheel. Meanwhile, Mohamed Zubya replaces Anis Saltou

50' Quite simply Libya need to do more in the second half after a lackluster display in the first 45 minutes. Sadly enough, they have no fans to back them in the stands but they need something to smile about!

46' We are back underway for the second half as Nigeria try to build on their slender lead.

The only concern for Libya is their discipline in the first half. They have been confrontational to say the least. A couple of players may have been fortunate to stay on the pitch, while Wilfred Ndidi was cautioned for his careless tackle. Gernot Rohr will have to monitor his team to ensure they keep their cool.

Gernot Rohr’s men will be looking for a second and they could well find it unless Libya raise their game. The Mediterranean Knights have just gone through the motions so far and they need to give Bader Hassan Ahmed some support before they lose this evening.

Odion Ighalo’s penalty is the difference at the interval and Nigeria definitely deserved to be in front. Etebo has been superb so far as he pulls the strings, while Jamiu Collins and Francis Uzoho have also looked sharp.

42' Whistling can be heard around the Godswill Akpabio Stadium and it appears that some of the home fans have lost their patience with the Super Eagles' missed chances.

39' Another misses chance from Nigeria as Samuel Kalu lets Libya win a goalkick. He races into the north Africans' backline but he carelessly let the ball slip out of the touchline

36' After a number of attempted clearances, Libya eventually latch onto a loose pass from Nigeria but Saltou loses possession

33' Samuel Kalu blows away the chance of giving Nigeria the second lead. He finds his way in the Libyan half, beats Ahmed Eltarbi before aiming waywardly at goal instead of feeding captain Ahmed Musa to wreak havoc

30' Freekick to Libya but Sand Masaud picks a needless yellow card for dissent by words towards the referee. The visitors make nothing tangible out of the kick and Nigeria have a chance to regroup.

27' The tempo of the game has dropped significantly after 28 minutes. Nigeria cannot afford to put their legs off the pedal after their dominance in the opening minutes.

24' Wilfred Ndidi cautioned for a foul on Mohamed Abdussalam. An elbow to the Libyan's head - that was really careless from the Leicester City midfield trojan. The north Africans restart with a free-kick.

21' Libya's offside trap fails Nigeria for the second time in the space of 10 minutes as Ahmed Musa breaks in behind. However, Libya have enough bodies back to quell the opening. Meanwhille, medics attend to Ismalel Sharadi who clashed with Jamilu Collins

15' Libya build possession from the back around the Nigeria half, but are stopped from moving further forward by a press from the Green shirts.

12' Libya almost got the equaliser but Francis Uzoho was called to make an audacious save. Motasem Sabbou beats Shehu Abdullahi to make a cross into the Nigerian goal area but Mohamed Abdussalam’s header was brilliantly stopped by the Elche goalkeeper

9' CHANCE: Ighalo falls inside the penalty area of the Libyans after a slight contact with goalkeeper Mohamed Abdaula but referee Jean-Jacques Ndala waves aside penalty appeal

6' Libya have now started to get back into the game and Sand Masaud and Ali Mohamed are the brains behind their moves.

3' GOAAALLLL Nigeria! It is now 1-0 and Ighalo is the man of the moment. The forward takes responsibility for the penalty and he steps up before firing past Mohamed Abdaula

1' Referee Jean-Jacques Ndala Ngambo (DR Congo) gets us underway and both teams are wearing their traditional strips. Nigeria in the chequered green, Libya in Red and Black