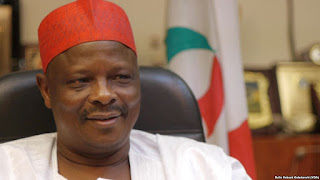 Peoples Democratic Party, PDP, presidential aspirant, Senator Rabiu Kwankwaso, has said he will return peace and tranquility to all trouble spots in the country if elected president.

In a message to Nigerians to mark the country’s 58th independence yesterday, Kwankwaso noted that the occasion should have been that of pomp and merriment but the humongous perils confronting the country called for sober reflections and deep introspection.

“I know how you feel. I know your pains, your expectations and your joys”, he said.
“It is incontrovertible that millions of our compatriots can no longer feed themselves because of biting hunger and excruciating poverty in the country. Before you are done reading this, at least, 28 more persons in our country would have entered into extreme poverty. Before this time tomorrow, over 10,000 more would become extremely poor”.

Saying the northeast is now a pathetic shadow of its glorious past due to Boko Haram insurgency which is still thriving because of the insincerity of our leaders in giving the insurgents a bloodied nose, Kwankwaso told Nigerians: “It is not your job to protect yourself, that is the job of your government.”


The aspirant said he was sad to observe that unemployment had now skyrocketed beyond what it used to be in the past.

According to him, there has never been a time the country has ever been this divided along tribal and religious lines thus making some folks to question the very basis of our continued existence as a collective unit bound together in our diversity.